Comebacks are as inevitable as the sun rising. Our Neanderthal ancestors saw the sun go down for the first time and thought that the world had come to an end, that the sun had disappeared. Little did they know that within a few hours, the sun came back up again and the day/night cycle was confirmed.

No different is the world of musical comebacks, and this one had me scratching my Neanderthal head and grunting confusedly.

Do fans ever really believe that when a band says they are splitting up, or that artists are stepping into retirement for good? Aside from an unfortunate death, or blistering in-fighting with the band members (and this usually only results in two separate bands being created, one with a new name and new approach, and one with the old name, old approach and half the original members,) nothing seems to stop some bands from returning.

Then two years ago, he announced that he had no intention of playing live, or recording ever again. Last year, he confirmed the suspicions of many Genesis fans by suggesting that owing to a progressive spinal injury, accumulated over the many years of sitting behind his trusty drum kit, he would no longer be able to play the drums. He did give a wink and a nudge to his fans though, suggesting that he would still be able to sing.

With the man fast approaching his 60’s, it wouldn’t be a surprise if he calmed down a little bit, and aside from a guest appearance as an Ape playing the drums on a Cadbury Chocolate advert (one of the most memorable of recent years – N.B. It wasn’t actually Phil Collins in the Ape suit, but it’s nice to picture it,) it finally looked like he was going to take his pipe and slippers. 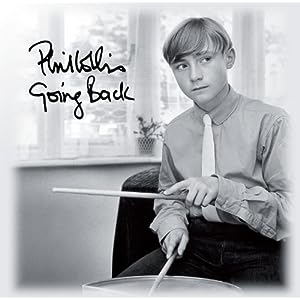 However, and perhaps one should no longer be surprised when these things happen, this week, Phil Collins has come back with a new single.

It’s a cover, which is perhaps a nice way for him to gently ease himself back into the writing process. It’s disappointing for the fans who eagerly awaited some brand new material, but it’s a very well-chosen cover.

Phil Collins lends his unmistakable vocals to the 60’s soul favourite, “(Love Is Like A) Heatwave” originally made popular by Martha Reeves and the Vandellas. It is the first single released from his upcoming album of Soul and Motown covers, “Goin’ Back.”

Thankfully, this back injury that prevented him from setting up the drum kit, clearly hasn’t affected his voice at all and he bashes out this cover with vigour and a relish that was lacking from some of his later material.

He looks healthy, well and like he’s having the time of his life. He’s been criticised in the past for being too sullen. He also took a lot of heat from critics when he took Genesis in a slightly different direction, with more pop and synth. However, he’s done away with both of these for this song, appearing cheerful amongst a large live band playing an upbeat classic Motown number.

There is the slight risk, that the more cynical among us may enjoy, that this album is simply a mortgage payment, or an expensive upgrade to an Italian sports car for the man whose name on a record, whilst not always a sign of quality, is usually a sign of great record sales.

Whatever the reason, there is no denying that he’s back in the public eye again. It is tipped to be a very successful and lucrative comeback, and whatever the reason behind it, will undoubtedly have people talking. One would just hope that the fans get a well-deserved album of original material from an undoubted legend, rather than just an album of covers as a way of funding some back surgery.