Narratives have the potent ability to make or break a music act. They can also do a disservice to a band by being at odds with the reality of the band. Not many music acts have been the victim of as many false narratives as Norwegian pop/rock trio a-ha has been. In the US, the mainstream press has written off a-ha as a synth-pop one-hit wonder and the commentary around the band revolves exclusively around their signature hit single “Take On Me” and its groundbreaking music video. The idea that the band did nothing else noteworthy is a common theme among American music listeners on the rare occasion when the band comes up in conversation. Contrary to popular belief, a-ha is far bigger than “Take One Me”. They are sonically more fluid than their synth-pop label would suggest. Songs such as “Celice” and “Analogue” from their 2006 album “Analogue” are prime examples of their rockier incarnation while “Summer Moved On” (from their 2000 album “Minor Earth Major Sky”) showcases the band gliding into Adult Alternative territory with relative ease. In 1991, a-ha entered the Guinness Book Of World Records for performing live for the largest paying audience (at the time) at Maracana Stadium in Rio De Janeiro (Brazil) as part of the “Rock in Rio” festival. The band also outsold the festival’s hot favorites Prince, Guns N Roses, and George Michael. This was the band’s career-defining moment and yet mainstream avenues such as MTV ignored it as it conflicted with the band’s “one hit wonder” status in the US. There was a widely held belief that synth-pop albums boasted a few hits nestled in a heap of generic and unremarkable filler. Here too, a-ha bucked the trend on their debut album “Hunting high and low”. The following comment from Sputnikmusic encapsulates this well:

80s pop is sometimes criticized for being repetitive and unoriginal. But “Hunting High and Low” does not fall into that trap. Each song is easily distinguished from the other. The fact that a variety of synth settings are used contributes to this. But this is also due to the simple fact that all the songs are structured differently.

The emotional highs and lows of the album are brought to life by dramatic orchestration and the achingly beautiful voice of lead singer Morten Harket. His ability to demonstrate vocal swagger on the uptempo tracks while embodying a wistful delivery on the sadder songs underscores the emotional roller-coaster that is “Hunting high and low”.

“Hunting high and low” is the album that catapulted a-ha into the world of international stardom and plastered them on to the bedroom walls of teenage girls across the globe. 2020 marked the 35th anniversary of the release of “Hunting high and low”. Hence, it only makes sense that the band would tour to celebrate this milestone playing the album in its entirety. Unfortunately, the pandemic derailed plans for the US leg of the tour and it was not until this month (April 2022) that a-ha was finally able to grace American stages with their presence.

This concert was their second at the Wiltern Theatre in Los Angeles. While standing in the queue outside the Wiltern Theatre, it became evident that fans had traveled from various parts of the US and Canada (and a few from overseas) specifically to attend one or more of the a-ha concerts at the Wiltern Theatre. There is definitely merit to the idea that scarcity induces value, relative price inelasticity of consumers, and the propensity of fans to travel long distances (despite rising inflation) to watch a band that has been conspicuous by their absence in the musical mainstream – and contrary to popular belief (in the US), has been releasing music to a lot of fanfare overseas.

a-ha’s relative obscurity in the American modern musical mainstream has the unintended benefit of the band performing in intimate venues. The art deco aesthetic of the Wiltern makes the venue a fitting one for the celebration of a classic album that has aged very well. Fans are the beneficiaries of this reality – especially those that are Los Angeles residents.

The concert’s setlist suggested that the band has made peace with their rather unfortunate positioning in the US and they embrace it with a sense of humor. This manifested in the band’s keyboardist Magne Furuholmen saying “we’ll get to the 80s and make sure you get what you paid for” after they opened with a rather unconventional choice – a track called “Sycamore Leaves” from their 1990 album “East of the Sun, West of The Moon”. If the intention was to use the concert opener as a vehicle to challenge their synth-pop label, it definitely worked as it showcased a rockier edge to the band. It also laid the framework for two distinct sections of the setlist. The first half was devoted to songs that were NOT on “Hunting high and low” while the second half (post intermission) revolved exclusively around songs from this seminal album (although the songs were not played in the order of the album’s tracklist).

The highlights of the first half were “Crying in the rain”, “You have what it takes“ (from their upcoming album “True North”) , and “Living daylights” (the theme from the James Bond movie of the same name). The first two of these highlight the band’s ability to weave a beautiful harmony with the unsung heroes of the band Magne and Paul shining vocally alongside frontman Morten Harket. “Living daylights” serves as a reminder that the band had to be far more significant than their signature hit single to be given the highly coveted honor to pen and form a James Bond theme. The band’s sophomore album “Scoundrel Days” has a special place in the hearts of a-ha fans. Hence, many fans were delighted that the first half of the show featured a healthy dose from this album – including favorites such as the album’s title track and “Swing of things”. For a band that starts off by saying “we’ll get to the 80s”, they still kept their feet firmly in that decade with the choices of songs for the concert’s first half (with the exception of the two new songs from “True North”) . This, in my opinion, was a missed opportunity and played right into the narrative of them being yesteryear’s stars. They visited the distant past. They visited the foreseeable future. Sadly, they conveniently ignored the years in between and the sonic gems that marked their glorious return to the musical mainstream overseas at the turn of the new millennium with legitimate hits such as “Summer Moved On”, “Analogue”, and “Foot of the mountain”. This concert could have been a catalyst for a re-evaluation of the band’s place in pop music but ignoring what made them relevant overseas to a new generation undermines that ability. 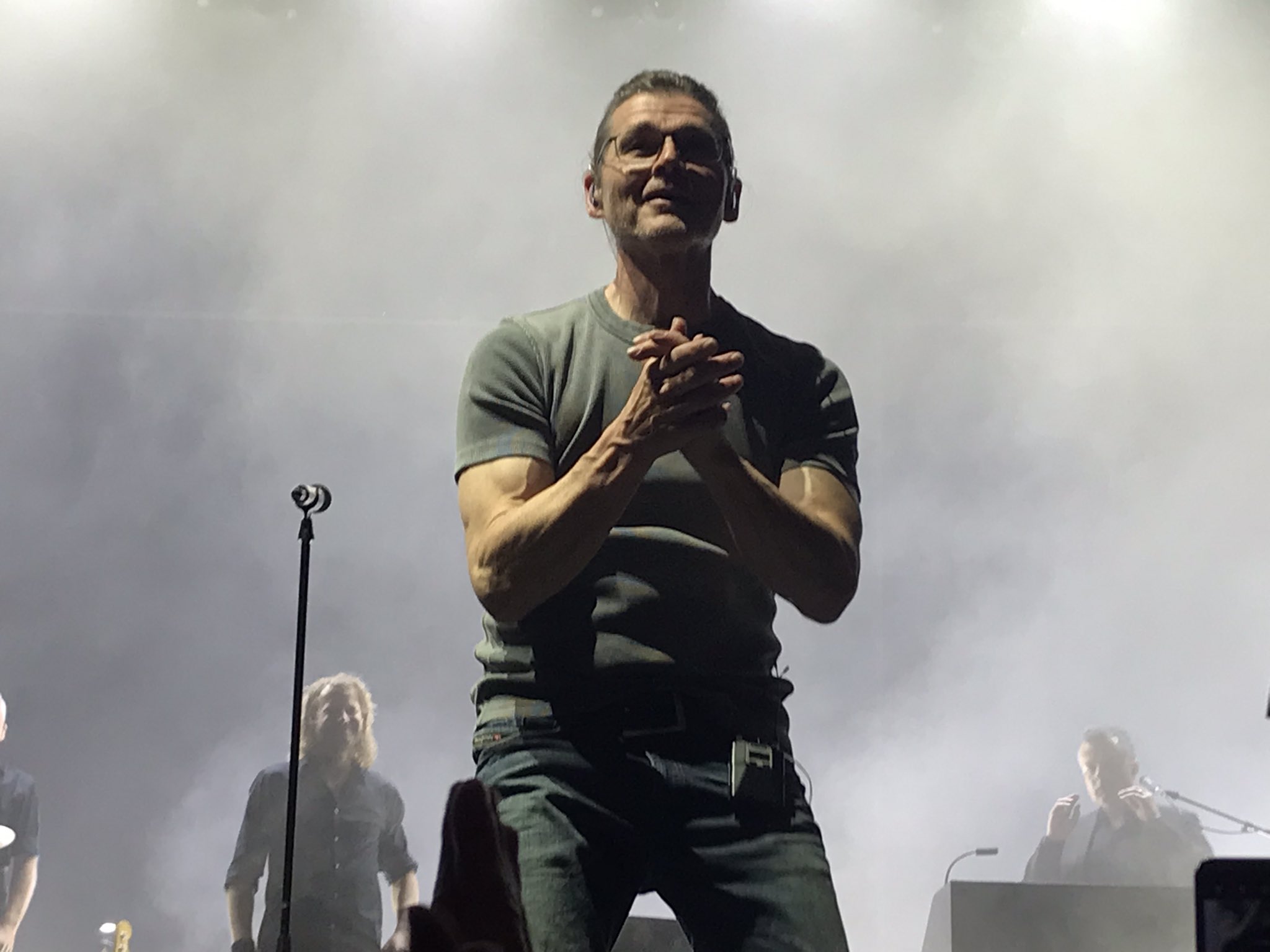 The second half of the concert was the gift that kept giving. It opened with a dynamite performance of “Train of Thought” (the fourth single from “Hunting High and low”). The most sublime moments were the slightly altered versions of “The Blue Sky”, “Here I stand and face the rain” (with its rather dramatic extended outro), and the delicate and poignant vocal delivery by Morten Harket on “And you tell me”. The audience participation moment surfaced on the band’s album title track “Hunting high and low”. Fans sang their hearts out while the band quietly beamed in the sonic glow of the audience. “The Sun always shines on TV” (the band’s only UK #1 hit) made for a fantastic pre-encore performance with the stage lighting accentuating the energy that the musicians on stage radiated. The final track of the evening was rather predictable. The band performed “Take On Me” with unbridled gusto momentarily shedding their conflicted feelings with regards to the song and its “mixed bag” effect on their musical careers. It is worth noting that lead singer Morten Harket has no trouble indulging his falsetto just like he did in the prime of his youth. The only real criticism of the second half was the fact that the prominent synth underpinnings of “I dream myself alive” felt drowned out.

Unlike with most other bands wherein the spotlight is grabbed almost exclusively by the band’s frontman, the distribution of charisma appears to be slightly more equitable with a-ha. The band’s keyboardist Magne Furuholmen was the only one that spoke to the audience. The magnetism of lead singer Morten Harket (who is now sporting a hint of a ponytail) was more understated. His overtures to the audience manifested as radiant smiles and occasionally putting his hand on his heart and nodding to specific people in the audience whenever they had more visible outbursts of enthusiasm. Paul Waaktaar, the band’s indisputable unsung hero appeared to have held on to his brand positioning as the quiet one in the band.

“Hunting high and low” is the polished end-product of sky-high aspirations of a group of friends that had no viable Plan B in the event of failure. Their ambitions to conquer the world with their music meant that they had to leave their home country of Norway. Along with a one-way ticket to the UK to realize their dreams of stardom, all they had was an abundance of confidence and belief in themselves. Fortunately, their grit and determination were well placed and as a result, “Hunting high and low” continues to retain its sonic luster over 35 years since its release. It was a privilege to hear some of the album’s lesser known gems – which also serve as a reminder that “Hunting high and low” was not your run-of-the-mill synth-pop album with a few hits nestled in the midst of filler. Each of these songs stands on its own merit. In fact, we play a bunch of the songs (not released as singles) from this album on our global 24/7 online radio broadcast. Massive kudos to a-ha for rewarding the unwavering loyalty of fans from a country whose musical mainstream was not nearly as grateful for the band’s music. a-ha is a musical treasure and this concert, despite some of its missed opportunities, was yet another reminder of that. We wish a-ha the best and hope they continue to keep audiences enthralled for many more years.

In case you did not pick up on this earlier, the blog you are reading is affiliated with Radio Creme Brulee – an online radio station that features an eclectic mix of current pop and rock music from both sides of the Atlantic alongside hits, forgotten gems, and rarities from the last three decades. Alongside newer artists, we also play plenty of newer music by bands that rose to prominence in the 80s,90s, and the 00s. Noteworthy examples include Simply Red, Wet Wet Wet, a-ha, Coldplay, Kylie Minogue, Dubstar, Tears For Fears, Duran Duran, Camouflage, Spandau Ballet, INXS, Depeche Mode, Suede, The Corrs, Jamiroquai, Johnny Hates Jazz, Simple Minds, and Culture Club.