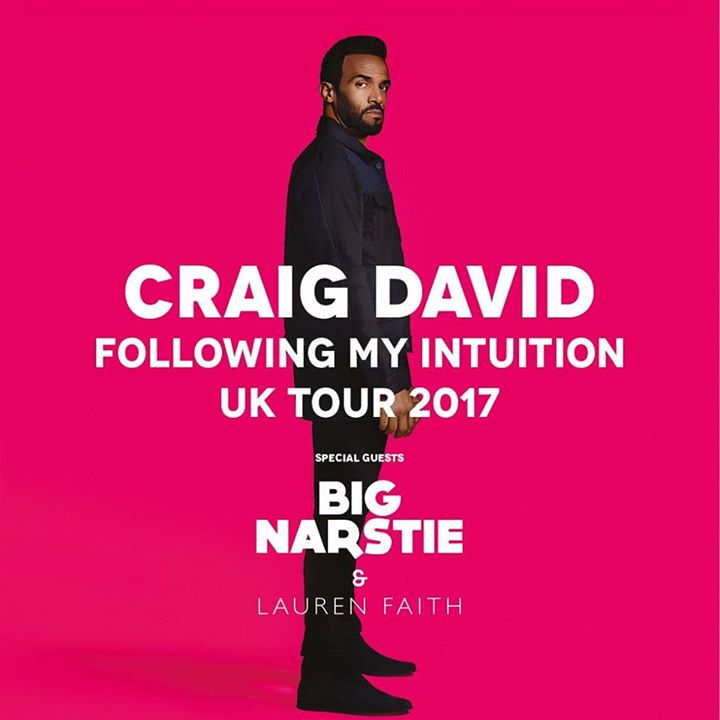 This concert review has been co-written with guest blogger Jordan Potts.

Artistry is a pre-requisite to success but it certainly does not guarantee it in the music business. Very few in the musical limelight have grasped this lesson as much as UK garage-turned-R&B superstar Craig David has. His relegation to relative obscurity happened almost as fast as his meteoric rise with this critically acclaimed and commercially successful debut “Born to do it” in 1999. With a silky smooth voice that is unmistakably his and only his, he seemed poised for a career that only had an upward trajectory. While his competence as a singer only got better with time, it seemed like his commercial star was starting to wane – and it was his sophomore album “Slicker than your average” that marked the beginning of this downturn (especially in the US). Almost a decade and a half later, his career renaissance began through an organic process which started with his TS5 parties (which are now concert events that sell out) in his Miami apartment. These parties were more than get-togethers. They were centered around a performance in which Craig David showcased a vibrant mix of freestyling, Ibiza-style DJing, and good old-fashioned soulful crooning. Through TS5, he was bringing back the notion of community around music. As the focal point of this new party movement, Craig David was quickly morphing into a brand of his own. He was starting to reposition himself as a musical entity without completely eschewing his R&B roots. He took this idea further by collaborating with British rapper and MC Big Narstie and started to re-embrace his UK Garage roots. The result of this collaboration was “When the bassline drops” – his first single to chart in the top 10 after what seemed like ages. This was the beginning of a string of successes and it looked like the love and support he once enjoyed was starting to resurface. More importantly, he was doing the seemingly impossible. He crossed over to a whole new generation that was either too young or was not alive when he first rose to prominence. For this new generation of music aficionados, he was, for all practical purposes, a new artist. The final litmus test around a true comeback emerged when his album “Following My Intuition” released last September and debuted at #1 on the UK album charts. It was the comeback against all odds and Craig David triumphed. Hot on the heels of the success of this album, he is back on tour and we had this article’s co-writer capture the highlights of Craig David’s second arena tour concert at the Echo Arena in Liverpool.

One of the first and most striking observations at the Echo Arena in Liverpool was the mixed age demographic of the audience – including an 8-year old for whom this was his first concert. It seemed to reinforce the reality that Craig David had transcended generational boundaries with his new music – in the same vein as Manchester boyband-turned-manband Take That did back in 2006. The venue seemed apt for two distinct facets that Craig David was aiming to showcase through this performance – that of the party-provider and that of the mid-tempo R&B crooner. It was large enough for a party atmosphere but not too large to the point of diluting the intimate environment in which his fans may have wanted to experience some of his heartwrenching slow jams.

Craig David does not exactly have a dearth of great material to perform in a concert setting but it looks like this tour revolves almost entirely about showcasing his commercial prime and absolutely nothing else. With over half the setlist featuring songs from his new hit album “Following My Intuition“, he is undoubtedly positioning himself as an artist of today and is leaving very little room for nostalgia. Songs from albums such as “Trust Me“, “The Story Goes” (with the only exception being “Don’t love you no more“) and “Signed Sealed Delivered” are conspicuous by their absence. It seemed like Craig David was making a deliberate effort to not revisit his less celebrated (but very credible) moments.

The highlights of the concert are as follows:

Ain’t Giving Up: Craig David opened with this club banger – a collaboration with British DJ Sigala and a key forerunner to his second career zenith. It was an effective choice in setting the tone for an evening that promised many adrenaline highs.

7 Days: This performance was one of the few glimpses into Craig David’s first (and sadly last) flirtation with the US top 10 singles chart. The crowd sang along through the entire length of the song.

When the Bassline drops: This performance featured a guest appearance by Big Narstie – a key catalyst in the Craig David comeback story.

Rise and Fall: This was a key moment in the concert. Until this point, Craig David’s audience interaction was limited to expressing gratitude for the newfound support both through people buying the new album and flocking to his live gigs. As he introduced “Rise and Fall”, he alluded to the fact that the lyrics of this song (a duet with Sting that also samples Sting’s achingly beautiful song “Shape of my heart” from his album “Ten Summoner’s Tales“) foreshadowed the downturn in his commercial trajectory and his fading star. Given the full circle that he has completed with the chart success of “Following my intuition“, this must have been a victorious moment for Craig as he crooned away on this track while being able to relate to every aspect of the song’s lyrics.

The TS5 segment: In a dramatic twist to the evening, Craig David made the seamless transition from a traditional concert to a TS5 segment which featured him freestyling over current hits such as Drake’s “One Dance” and “Girls Like” by Tine Tempah. He also went into Ibiza DJ mode mixing tracks such as “No Scrubs” by TLC and “Bump N Grind” by R Kelly. TS5 is a key milestone in Craig David’s stylistic diversification and on his path to current relevance. Hence, it only made sense that he would devote a portion of his concert to this facet of his.

Craig David is undoubtedly a consummate performer that has the enviable ability to take the crowd through different moods while keeping them enthralled throughout the concert. That being said, the concert did have its potential improvement areas.

While we absolutely respect Craig David’s decision to position himself like a new artist does, we cannot help but think that he is doing his legacy a disservice by showcasing so little of his back-catalog – a critical forerunner to the artist he is today. While a concert is an opportunity to celebrate what people love and know, it is also an opportunity to pique the curiosity of the younger generation of listeners by giving them a glimpse into different phases of one’s musical past and setting them on a path of discovery into the artist’s back-catalog. Craig David may have missed this opportunity by excluding fantastic songs such as “Hypnotic“, “Last night“, “Rendezvous“, “Insomnia“, and “Hidden Agenda” from his setlist. These are some of the finest (if not the most successful) moments of Craig’s career. For his TS5 segment, Craig David could have invested a little more into the visual aesthetic of the stage atmosphere to create a visual complement to the sonic emulation of Ibiza with lasers, pyrotechnics, and smoke machines.

As a radio station and blog that celebrates both the commercial highs and lows of artists from both today and yesteryear, it brings us immense joy that Craig David qualifies as an artist of today and yesteryear. We are unapologetic cheerleaders for this return to the top and we can barely wait for him to bring the “Following my intuition” arena tour to the US (sadly, no dates have been scheduled yet). Until then, we have to make do with his TS5 gigs in New York and Los Angeles – which is not a bad consolation by any stretch. It is our sincere hope that Craig David is able to capitalize on this newfound momentum and lay the groundwork for a sustained (as opposed to momentary) return to the music scene – one that rivals that of Take That.

We are an American internet radio station that broadcasts worldwide. The station features an eclectic mix of current pop and rock music from both sides of the Atlantic alongside hits, forgotten gems, and rarities from the last three decades. The music of Craig David has been a regular staple on our station ever since its inception back in 2007. We routinely feature some of the less-celebrate gems from Craig David’s legacy such as “All Alone Tonight“, “Hypnotic“, and “Last Night“. Currently, “Louder Than Words” by Craig David is getting 5 plays each per day on our station.