8 May 2019 No Comment
This blog belongs to Radio Creme Brulee – an internet music radio station that broadcasts globally. 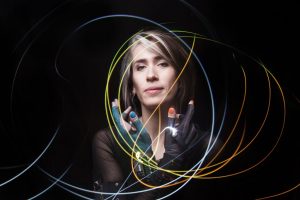 To say that multiple Grammy Award winner Imogen Heap is one of the most fascinating brands in music to have emerged in the last two decades would be quite the understatement. I refer to her as a brand and not merely as an artist because her versatility is not constrained to the world of writing, recording, and producing music. In the realm of recorded music, she has been constantly stretching the boundaries of her unique sonic template. Her vocals flit from breathy to whispery to ethereal. Interwoven harmonies, acoustic instrumentation laced with electronic embellishments (and not the type that feel inhuman or lack warmth), and breathtaking melodies are just a few of the elements that define her dreamy and richly textured soundscape. While evolving her sound from the unshackled experimentation on her debut album “I Megaphone” (an anagram of her name) to the commercial sensitivity of her breakout album “Details” as part of the duo Frou Frou (with producer Guy Sigsworth) to the unabashed inclusion of eastern elements on her 2009 album “Ellipse” (especially on the album’s lead single “First Train Home”), she has also become a tech entrepreneur and a music industry thought leader. She is relentlessly driven to address some of the key structural inadequacies of the modern music industry. This is what a music brand needs to look like in 2019 and Imogen plays that critical role incredibly well. Anyone that believes that pop music and unpretentious intellectualism are mutually exclusive need not look any further than Imogen Heap to challenge that misguided view.

The opportunity to see Imogen live has evaded me ever since she rose to prominence as part of Frou Frou (named after the French word for the rustle of silk) and as a solo artist. Hence, when I heard that she was going on tour and NOT to promote a new album (even though she has completed one as recently as last year but has not released it yet), I knew I could not miss this. I have always believed that artists do far more justice to their back-catalog in a concert when they are NOT promoting a new album. Tours centered around a new album tend to favor newer songs over sonic gems that cemented the status of an artist in contemporary pop culture. Imogen’s Mycelia (named after her blockchain-based music-sharing program) world tour is special since Guy Sigsworth (her former collaborator from the one-album duo Frou Frou) is also a part of it. While Imogen has carved out a successful personal branding for herself outside of Frou Frou, she is inextricably linked to the cool and stylish elegance of the “Details” album by Frou Frou in the minds of many casual fans – many of whom wondered why there was no follow-up album to “Details”. It appears that Imogen has made a special effort to cater to both the ardent and casual ends of her fan spectrum through her setlist which features a non-trivial dosage of the “Details” album (including the album’s breakout hit “Let Go” – which featured on the Garden State movie soundtrack).

It appeared that from the first moment of the concert, Imogen Heap seemed intent on turning the standard concert format on its head. She was the first of her band to walk on to the stage with a pleasant and unassuming greeting of “hellooooo” to the audience promptly at 8 p.m. This is in stark contrast to every concert I have attended wherein the concert usually starts at least 20 or 30 minutes after the scheduled time and the entrance of the artist (especially one with a caliber comparable to that of Imogen Heap) is usually very diva-like. Her quirky dress was as much a manifestation of her personality as it was a reflection of her longstanding penchant for crowdsourcing blended with a spirit of patronage for other artists. She wore a dress designed by a Mexican dress designer living in New York City. Apparently, her concert attire is designed by a local designer in each of the cities on the Mycelia world tour. This was the first of several deviations from age-old concert norms.

Imogen Heap is acutely aware that her fame in America began with Frou Frou. To this end, she celebrated the origins of her American fame via the concert’s opener – a new downtempo track by Frou Frou titled “Guitar Song”. The song starts off as a mellow and stripped down guitar-driven track and its additional sonic layers start to emerge on the goosebump-inducing chorus. The song’s most sublime moment is its Middle 8 in which Imogen sings “Heaven will be the moment that you wake up with me next to me”. Needless to say, “Guitar Song” makes for a worthy opener for a concert in which Imogen showcases some of the finest moments of a career that has spanned over two decades. It was also the precursor to the second deviation from the standard concert format. She went right ahead and introduced her band to the crowd. This tradition typically happens towards the end of a concert.

I have always believed that for a songwriter, the embryo of a song is a story. Imogen Heap generously shared the genesis of most of her songs as she introduced each one of them. The most noteworthy of them was her introduction of “First Train Home” – a song that describes her desire to take the first train home while being a reluctant attendee at a party. This context undoubtedly sheds light on a memorable lyric from the song’s Middle 8 in which she says “So what? I’m not that much fun to be with“. While this is not an unusual tradition, Imogen Heap gave the audience a far greater glimpse into the origins of her songs than most artists do. 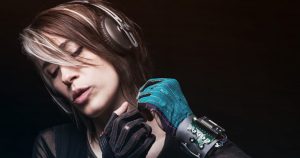 Early in her set, Imogen enthusiastically shared a demo of her highly acclaimed Mi.Mu gloves – a wearable musical instrument that allows the artist to connect sound to his or her movements. It was fascinating to watch sound being manipulated in a live environment. These gloves are an integral part of Imogen’s performance art. The audience was enraptured as she used them in each of her songs to commandeer the dreamy and dramatic sonic elements of her soundscape with graceful gestures that could easily be mistaken for exemplary choreography with no role outside the purely visual. These gloves have made Imogen the darling of many tech conferences across the globe.

Being an artist that is also a thought leader in a music industry plagued with a host of challenges makes Imogen Heap uniquely positioned to answer pointed questions around some of the self-defeating music industry dynamics. To this end, Imogen welcomed questions from the audience and provided thought-provoking answers. It is fair to say that the audience most likely walked out feeling smarter and more well-informed than they were at the beginning of the concert. She also pointed out that innovation that revolves solely around streaming does not cater to the vast majority of artists that cannot make a living solely from streaming.

Her setlist appeared to showcase every slice of her staggering vocal range that left the audience spellbound multiple times. The finest performances of the evening includes those of “Let Go” (from the Garden State Movie soundtrack), “It’s good to be in love“, a vocoder-free rendition of her breakout hit “Hide and Seek“, “Goodnight and go“, and “Entanglement” (especially the achingly beautiful cello section by Zoe Keating). In fact, she ought to release live versions of “Let Go” and “It’s good to be in love” – as they were far superior to the studio versions of the songs.

After commenting on how utterly predictable and pointless the pre-encore exit of an artist from the stage is, she concluded the concert with just her and Guy Sigsworth performing the minimalist Frou Frou track “Dumbing down of love”. Their embrace before they took a bow to thank the audience was heartwarming and a nod to a creative partnership that put Imogen Heap on the map. 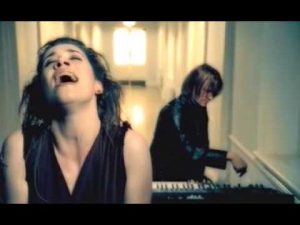 Perfection in a concert is an illusory dream and this one undoubtedly had a few missed opportunities. While the concert’s setlist featured quite a few songs from Frou Frou’s “Details” album, songs such as “Must Be Dreaming” and “Hear Me Out” (featuring songwriting input from legendary hit producer Brian Eno) were conspicuous by their absence. The setlist’s most noteworthy omission was that of “Just for now” – which features some of the most beautiful harmonies wherein each vocal component of the harmony has been contributed solely by Imogen Heap.

Despite the missed opportunities, Imogen Heap proved that she is a potent force to be reckoned with. She is a bright star in a music industry that does not even aspire for the greatness that she envisions creatively and commercially (for the music business at large and not for herself). The legacy that stems from her musical and technological endeavors will undoubtedly be a milestone for the music industry and she will be the subject of many studies in the future on artists that have been catalysts for a vision and purpose beyond themselves. The fact that she is not a household name is one of many manifestations of the issues of the modern music industry. That being said, she does offer more than a glimmer of hope and I can barely wait to see what she embarks upon next. 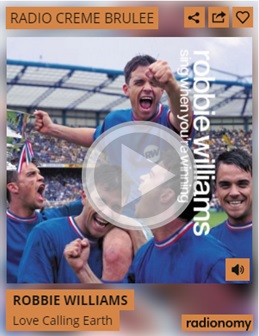 We are an American internet radio station that broadcasts worldwide. The station features an eclectic mix of current pop and rock music from both sides of the Atlantic alongside hits, forgotten gems, and rarities from the last three decades. The music of Imogen Heap (including the new Frou Frou track “Guitar Song”) is a regular staple on our station. Alongside music by new artists, we play plenty of newer music by bands that rose to prominence in the 80s and the 90s. Noteworthy examples include Tears For Fears, Duran Duran, Robbie Williams, Lighthouse Family, Take That, Camouflage, Spandau Ballet, Jamiroquai, Suede, The Corrs, Dubstar, a-ha, George Michael, INXS, Depeche Mode, Johnny Hates Jazz, Simple Minds, and Culture Club.