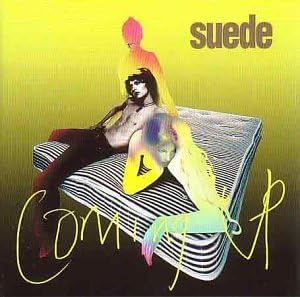 In a Virgin Radio UK Classic albums episode from three years ago, the host Jamie East referred to the emergence of London-based rock band Suede as the birthing of the Britpop movement – a cultural movement in the 90s that encompassed comedy, art, film, and literature. It was defiant in its tone and theatrical in its presentation. The posterchildren of this movement were Oasis, Blur, Suede, and Pulp. But despite being lumped in with these three acts, Suede marched to the beat of their own drum and seemed relatively untethered from the shackles of conformity or a predefined sound. Thematically, their songs documented British life and made Suede a phenomenon in their home country. Yet, it was the application of their musical sensitivities and a new-found songwriting ethic with the band’s new members Richard Oakes and keyboard player Neil Codling towards a “fizzy, brash pop record” (as described by the band’s stylish frontman Brett Anderson) in the form of their third album “Coming up” that catapulted them to a global phenomenon (outside the US). I have been a Suede fan for over 25 years and it’s such a momentous milestone that fans of the band will be celebrating the 25th anniversary of Coming Up on September 2nd, 2021.

I remember I had just graduated from university in a nowhere town in the North East of England, not quite sure what to do next but I’ll always remember the summer of 1996 for the release of “Trash” (the lead single from “Coming up”) and then of course the album “Coming Up”. It became the album that would shape me and the album that defined the 90s for me.

Suede were back with guitar genius and saviour Richard Oakes (as he stepped into the shoes of the band’s former guitarist Bernard Butler) and the newest member Neil Codling who embodied the essence of Suede before he was even in the band. Lead singer Brett Anderson had moved from the isolation of his gothic basement flat in Highgate to a sunny top floor maisonette in Ladbroke Grove (a road in West London in the Royal Borough of Kensington and Chelsea).

After the relative commercial disappointment (although the most critically acclaimed) of their sophomore album “Dog Man Star”, the band was laying the foundation for a new start and a new way of working together as a band. More importantly, this sonic rejuvenation was rooted in a positive focus on what they wanted to achieve with their third album. In David Barnett’s book “Suede” The Biography”, Brett Anderson indicated the following: “I think the next album will be quite simple, actually. I’d really like to write a straightforward pop album. Just ten hits”. That is exactly what they did.

Despite having considered other producers for the album, the band decided to work again with Ed Buller knowing well that he shared their vision – with the aim of each track having the potential of being a single. This method worked and they had 5 glorious UK top ten singles. With Peter Saville on board with the artwork, they created 6 beautiful iconic sleeves. These are undoubtedly a must-have in any Suede fan’s collection.

Suede made the conscious choice to eschew the cartoonist wave of the Britpop movement. They stayed true to themselves while observing and documenting the real world they lived in. The album explored the themes of escapism, gritty relationships, outsider-dom, a slice of ordinary life and celebrity fools. A whole generation of music lovers could relate to the lyrics and finally feel like they belonged and were understood.

The album’s chart success (it topped the UK albums chart and the worldwide sales by 1998 reached 1.5 million) was undoubtedly propelled by singles that made for potent radio fodder.

The album’s lead single “Trash” has become even more important as the years have passed. It’s become our anthem in the Insatiable Ones Suede fan community. It celebrates our mutual camaraderie as a tribe. It is a song about the band and by extension its fans. In Mike Christie’s Classic Albums Coming Up documentary, bass player Mat Osman refers to “Beautiful Ones” (is Suede’s “Hey hey we’re the Monkees” (a reference to American pop/rock band The Monkees).

Recently, Suede hosted a “Coming Up” Tim’s Twitter Listening Party to celebrate the release of the “Coming Up” documentary. For those of you not familiar with the concept, Tim Burgess (a BBC music radio host and lead singer of the alternative rock band The Charlatans) had been hosting Twitter Listening Parties ever since the onset of the Covid-19 pandemic and continues to do so. This Twitter event has proved to be a much needed lifeline for music fans. Here are a few points of interest and fun facts from that listening party.

– “Trash” was the last song Suede wrote for the album.
– “Filmstar” features handclaps from Culture Club frontman Boy George.
– “Lazy” and “By The Sea” were the first two songs Brett Anderson wrote for the album.
– Brett wrote “By The Sea” in his Moorhouse Road flat on his piano in 1993.
– “She” is Brett’s favourite song on “Coming Up”.
– “Starcrazy” was Neil Codling’s first song for Suede.
– “Picnic By The Motorway” was Richard Oakes’ first piece of music that he wrote for Suede in the Autumn of 1994.
– Brett suggests that he would have replaced “The Chemistry Between Us” (a regular staple on the radio station associated with this blog) with “Europe Is Our Playground”
– Mat Osman cannot wait to play “The Chemistry between us” live.
– Brett cites “Saturday Night” as “the romance of the every day”.

For me, it’s a classic and timeless album that is nostalgic and relevant to today in equal measures. Hindsight can be a wonderful thing but I truly believe that with “Coming Up”, the tracklist is perfect. Brett recently indicated that “Europe is Our Playground” (the b-side for “Trash”) should have made it on to the album. Whether fans agree or not, Brett’s propensity towards reflection reveals a strong work ethic, his desire for the band to be the best version of itself, and a capacity for self-criticism. In his view, the day that self-criticism stops is the day the music stops. The album’s singles have also spawned a little treasure trove of brilliant b-sides (which are conspicuous by their absence in the modern musical mainstream).

The reception of “Coming Up” across the UK, Europe & Asia was incredible. All the intensive touring had paid off. “Coming Up” was released in the US a few months later in April 1997. Its delayed release is one potential reason for its relatively muted success in the US (relative to that in the rest of the world). That being said, it did resonate with the US’ “alternative crowd”. Suede was also yet another manifestation of the US musical mainstream’s growing insularity from the broader global pop landscape in favor of a more geo-centric bias. This did not stop Suede from acknowledging their US fans in the form of a sonic overture – a special multimedia double disc limited edition released with bonus tracks, live performances, and a behind- the-scenes documentary for US fans. Suede did the Coming Up North American tour in 3 cities in Canada – Toronto, Ottawa, Montreal plus 3 states in the US covering 4 cities. Maybe a wider tour would have changed their success but I’ve spoken to many US fans who have the best memories from these gigs. In fact, please take a look at Rachel Apps North American Tour diary piece in our latest issue of The Insatiable Ones Fanzine. I highly recommend for US fans to look out for Mike Christie’s Classic Albums Coming Up Documentary which will be aired around the world at some point in the near future.

So join me and get your “Coming Up” albums ready and indulge yourself in 42 minutes and 27 seconds seconds of pure sonic bliss – the album that shaped so many lives.

Suede will start their Coming Up 25th Anniversary UK tour in November starting in Edinburgh and an army of fans will ride that wave of nostalgia and know that Suede are still vital. This is a worthy celebration of an album that has truly endured.