Every year, we have our listeners vote for their favorite singles of the year via our facebook fan poll. We were meant to post this over two weeks ago. On behalf of Radio Creme Brulee, I sincerely apologize for the delay with this post. The delay was unavoidable. Hopefully you will forgive us. Until then, here are our top 10 singles of 2013 as voted for by our radio station’s listeners.

10. Suit & Tie (Justin Timberlake featuring Jay Z): At the time of the release of this song, we at Radio Creme Brulee hailed it as the first great single of the year. It feels nice to attach a stamp of approval to an artist that we have never been particularly fond of until this past year. “Suit and Tie” sounds like a delectable throwback from the 70s that has been updated to reflect a modern sound by hit producer Timbaland. The song did have a polarizing effect because of its minute-long lackluster introduction but we definitely loved it and so did our listeners.

9. Treasure (Bruno Mars): 2013 was undoubtedly the only year in this past decade that truly celebrated an “old school” sound. The success of “Treasure” – the lead single off of Bruno Mars’ “Unorthodox Jukebox” album is proof of this. Bruno Mars has emerged as a potent force in the pop landscape. While his musical output is not consistently good, he definitely has his moments. “Treasure” is one of them.

8. King Of Everything (Boy George): One of the more surprising “commercially viable” returns of the year was from a rather unexpected person – Boy George. Most pop aficionados were under the impression that Boy George had reunited with his former bandmates from Culture Club and was working on a new album with them. While this was true, work on the Culture Club was halted and Boy George flirted yet again with a solo endeavor which manifested itself in the form of the album “This Is What I Do“. The album’s lead single “King Of Everything” is a rock-tinged downtempo track in which Boy George writes from the perspective of a boxer that is reflecting on losing his away and wondering if he can retain his crown again. This song is without a doubt Boy George’s most commercial singles in almost a decade.

7. Girls (The 1975): British “power pop” made somewhat of a return in 2013 through the sound of Manchester-based indie rock outfit The 1975. The band is “indie enough” to be taken seriously while being lightweight enough for a mass market. “Girls” was one of their better attempts from their eponymous debut album. The band could very well have a promising future and also replicate the success within the confines of the UK here in the US too.

6. Limpido (Laura Pausini featuring Kylie Minogue): Star power has never looked better than the collaboration that spawned this fantastic single. In 2013, Italian pop superstar Laura Pausini celebrated 2 decades in the music business and released a greatest hits compilation to commemorate her long and successful run in the music business. The compilation’s lead single “Limpido” featured Aussie pop princess Kylie Minogue. Most collaborations are better in concept than they are in reality. Fortunately, “Limpido” veers much closer to the latter. Kylie and Laura complement each other very well in this fiercely sexy duet sung half in Italian and half in English. For those wondering if Kylie was losing her edge definitely reinstated their faith in her as she prepares for a full album release in 2014.

5. Elevate (St Lucia): For a pop aficionado, the first person that comes to mind on hearing this song is Steve Winwood – which is rare considering Steve Winwood rarely pops up in discussions about commercial music these days. There has been a growing movement of artists trying to emulate some of the elements that made music from the 80s great. The first wave of artists (Presets, Cut Copy etc.) worked on emulating the synth-heavy production style of music from the 80s. St Lucia seems to emulate the melodic aspects of music from the 80s and the endeavor truly works on “Elevate” – a hook-laden mid-tempo track that distinguishes itself from most of what was released in 2013. 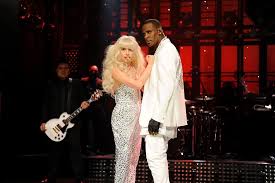 4. Do What U Want (Lady Gaga featuring R Kelly): We have always been quite reluctant to praise Lady Gaga the way most of the mainstream does. Her theatrics and style-driven statements are not exactly new in the music world (Boy George and Madonna had this down to a science in the 80s). We yet think of her as a “style over substance” artist that is incredibly competent at over-compensating with the extraneous elements of pop genius as opposed to nurturing its core components. That being said, with “Do What U Want“, Lady Gaga comes extremely close to winning a huge stamp of approval from us. This duet with R Kelly truly “works”. It has a great sing-a-long hook-laden chorus that is bound to get stuck in the heads of listeners. The comparisons to Madonna have only truly started to make sense with this song. If that doesn’t make you curious about this song, we are not sure what will. 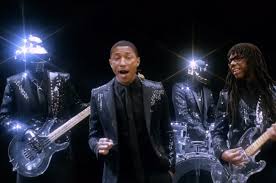 3. Get Lucky (Daft Punk featuring Pharrell Williams): The mainstream media might hail “Get Lucky” as 2013’s best single. It also marks one of the biggest comebacks of the year – that of French electronic duo Daft Punk. The last Daft Punk album met with a lukewarm response. In late 2012 and early 2013, there was a lot of buzz around high-profile collaborations between Daft Punk and music industry heavyweights such as Pharrell Williams and hit producer Nile Rodgers. By the end of Spring, album teasers started to emerge and showed signs of promise. It did not seem to matter that “Get Lucky” released on the day all of the US was glued to their televisions and radios to find out the status of manhunt for Boston Marathon bomber Dzhokhar Tsarnaev. In fact, one the day of the single’s release, the song’s producer Nile Rodgers tweeted that he was overwhelmed by the response to the track despite to the sorrow and thirst for justice that the US was consumed with after the Boston Marathon bombings earlier that week. This fantastic “electronic meets funk” jam featuring Pharrell Williams on vocals took the world by surprise and has become Daft Punk’s biggest hit to date – not bad for an act that has been in the music landscape since the early to mid-90s.

2. Go Gentle (Robbie Williams): Artists that strive for a media-endorsed stamp of versatility often stretch out of their pop/rock comfort zone and leverage their vocal prowess in a genre that is not typically lapped up by the mainstream masses. Noteworthy examples include Sting and George Michael. Robbie Williams is yet another. In the early 2000, he showed the world that he could make the bold and creative foray into swing music with his hit album “Swing when you’re winning“. Almost a decade later, Robbie Williams pleased his fans yet again with a second flirtation with this genre on “Swings Both Ways“. The album features a mix of covers and originals. For us, the originals are always more interesting since we’ve heard the standards covered over and over again by many artists and very rarely do any of these artists bring a particularly new life to any of those songs. This album’s lead single “Go Gentle” is everything one would hope for in a Robbie Williams swing track – smooth, classy, and catchy. It is still absolutely mind boggling that Robbie Williams has been kept at bay from the mainstream American masses. 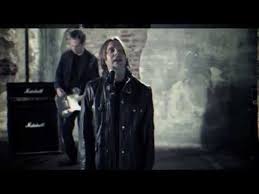 1. Magnetized (Johnny Hates Jazz): “Shattered Dreams” by Johnny Hates Jazz just might have been one of the biggest singles of 1988. Its beauty was rooted in its contradictory elements of an uptempo beat mixed with a deep-rooted melancholic lyric. Johnny Hates Jazz definitely came across quickly as a band poised for greater success with their super-infectious “Turn Back The Clock” album – one that has continued to stand the test of time. Unfortunately, it seems like their story ended even before it truly began and the band became a distant memory despite the fact that “Shattered Dreams” continues to be a radio staple today. Last year, Clark Datchler and Mike Nocito resurrected the band and gave us a true sequel to “Turn Back The Clock” AND a “Shattered Dreams” of 2013 (i.e. “Magnetized“). One cannot help but smile on listening to this track and being grateful that the dynamic duo (formerly a trio) is back.

Here is a full-length video clip of “Magnetized” below:

A HUGE “thank you” to those of you that voted for the tracks via our facebook poll. We wanted the annual top 10 to be reflective of the tastes and preferences of our listeners. Let us hope 2014 gives us greater music.