This concert review is co-written with US-based Debbie Martinez – our guest blogger and an ardent a-ha fan that traveled far to make sure she could be ours eyes and ears on the ground.

For those that tune into our 24/7 radio broadcast, they wonder how and why we believe that a mix of artists such as Coldplay, Def Leppard, The Chainsmokers, Ne-Yo, Clean Bandit, Sade, and Green Day fit alongside each other on the same radio format. More importantly, they wonder why we consider ourselves a pop music radio station. We have always maintained that pop music is about melodic hooks and intricate harmonies – and the selection of music on our station is a manifestation of that belief. The lyrics, to us, are the icing on the cake. The treatment of music is far less important to us than the underlying music. It is very easy to conceal shortcomings in pop music when the song is drenched in glossy production – something many of the acts that emerged in the 80s were often accused of. It is only when songs from these acts were presented in their embryonic form did they get their due. The intrinsic beauty of a pop song is allowed to radiate when all of it is communicated through acoustic instruments and a vocal that is not tampered with by recording software such as Protools or vocoders. We have often wondered why an under-rated but incredibly talented act such as a-ha took so long to embark on an endeavor that showcased the embryonic beauty of their songs all of which stemmed from a rich tradition in superior songwriting by all three members of the band. Often written off as synth-pop “pretty boys” of the generation that grew up watching MTV, the members of a-ha never truly received the credit they deserved. This problem was amplified by their legacy being tied almost exclusively to their signature track “Take On Me” in America. To add salt to their wounds, their world record for playing to the largest paying audience(198,000) at the Maracana stadium (Rio De Janerio) for the 1991 Rock In Rio festival was largely overlooked by all mainstream media outlets – probably because this groundbreaking world record was at odds with the narrative that the American media had crafted and perpetrated around a-ha being a largely lightweight bubble-gum pop act with limited appeal at a specific point of time in pop music history. The return of a-ha in 2015 with the brilliant “Cast In Steel” album suggested that the band was not done saying all that they had to as a trio. This year, not only does a-ha feel like they have more to say but they are determined to force a re-evaluation of their music legacy by showcasing their songs in an acoustic format. A rather small and privileged group of fans from all over the world got the golden opportunity to attend two MTV Unplugged performances which were recorded for an album. 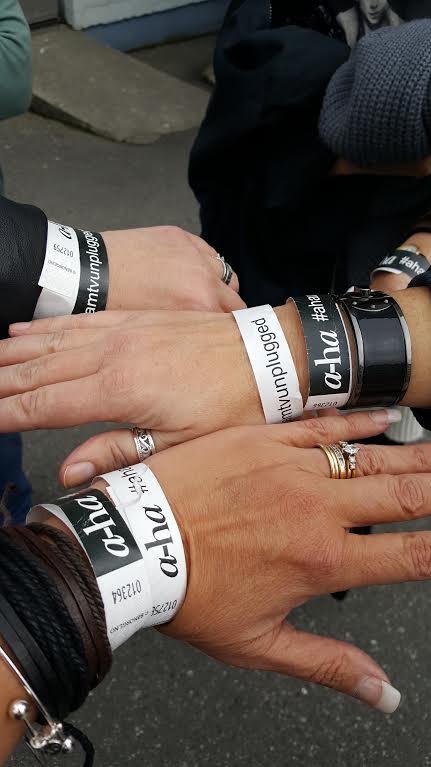 In fact, the list of countries from which the concert attendees came from is quite extensive. The following constitute a subset – namely Japan, Germany, Italy, France, UK, Brazil, Australia, Canada, Norway, Israel, Finland, Denmark, and the US. Not only does this suggest the global appeal of a-ha but it also provides more than a glimpse into the willingness for people from different countries to travel long distances for a music experience that they consider almost sacred. There is no greater experience for a music aficionado than to witness the recording of an album.

To say that this performance and album recording was more than the band showcasing an acoustic rendition of the band’s hits, rarities, and cover versions featuring special guests would be quite the understatement. This acoustic concert was a celebration of defining elements of the band’s heritage.

The first element of this heritage is a-ha’s Norwegian origin. a-ha had reached artistic and commercial highs on a global scale in a way that no Norwegian band had ever aspired for before them. Hence, it was only fitting that this recording/performance was at the Giske Harbor Hall next to Ocean Sound Recording Studios – located in a rather dramatic backdrop along the coast in Giske – an island municipality in the Alesund region of Norway.

The second element of this heritage is the MTV unplugged format of this performance. a-ha’s rise to global stardom and MTV are inextricably linked. MTV’s scale and relevance as a platform to showcase music videos to the world was unparalleled. The groundbreaking video for a-ha’s “Take On Me” in MTV’s early days undoubtedly did wonders for the music video brand and even greater wonders for a-ha as their posters came to be plastered on the walls of bedrooms of fans all over the world. The unplugged format was popularized by MTV – although a-ha was not one of the acts that featured in their series of acoustic and stripped down concerts. We see the MTV Unplugged format as being a nod to MTV’s critical role in the rise of a-ha. What many do not know is that prior to the release of the video for “Take On Me“, the song had flopped multiple times.

The third element of this heritage is an acknowledgement of the musical movement in which a-ha rose to stardom – namely, New Wave. This movement was dominated mostly by British acts such as Duran Duran, Depeche Mode, Echo & The Bunnymen, Spandau Ballet, Tears For Fears, The Human League, Simple Minds, and New Order. a-ha was one of the few “foreign” acts (along with INXS from Australia) that featured as one of the defining figures of the era that was dominated by New Wave. Many New Wave fans see “The Killing Moon” by Echo & The Bunnymen as one of New Wave’s finest sonic moments. a-ha appears to have agreed with this widely held notion and demonstrated their agreement by performing a stunning cover version of “The Killing Moon” along with special guest Ian McCulloch – the dynamic frontman of Echo & The Bunnymen. McCulloch also joined the band on their performance of the title track of their sophomore album “Scoundrel Days“.

The fourth element of the a-ha heritage is their propensity to return without rehashing. In the year 2000, when they returned with the critically acclaimed “Minor Earth Major Sky” album which featured the blindingly beautiful hit single “Summer Moved On“, they sounded nothing like they did in their synth-pop era as one of the faces of New Wave. When they returned in 2015 with their brilliant album “Cast In Steel” after officially calling it quits as a trio in 2010, they came back not to capitalize on their legacy but to deliver something that rivaled some of their finest work. The album was a return to the band’s synth roots wherein quite a few of the songs (e.g. “Cast In Steel“, “Under the makeup“, “Giving up the ghost“) were laced with goosebump-inducing string arrangements. It looks like the band understood that they had to deliver far more than nostalgia to fans that had traveled from all around the world to attend these rather expensive recording sessions/concerts. In the spirit to please and over-deliver, they opened with a new song titled “This Is Our Home” – a song written by Magne Furuholmen with some help from lead singer Morten Harket. The song was downtempo and fit very well alongside the classics and rarities. Hearing it being formed with the dramatic Norwegian landscape in the background reiterated the band’s nod to their Norwegian heritage. The second new song of the evening was “Break in the clouds“. While the song was stylistically similar to “This is our home“, it was written by Paul Waaktaar – one of the band’s key songwriters and guitarists. Interestingly enough, neither of the songs are similar to any of their previous material.

For a band whose signature hit “Take On Me” is largely propelled by the memorable and repeating synth solo refrain, they sure had no problem getting rid of that section altogether for the acoustic rendition of the song. This was the final song of both evenings. It showcased the song in a new light and forced a re-evaluation of the song’s melody and lyrics.

The band was supported by a stellar ensemble of musicians including Karl Oluf Wennerberg on drums, bassist Even Omerstad , Morten Qvenild, and Lars Horntveth. The setlist (shown below) suggests that the band truly believed in showcasing every phase of their legacy. No album is over-represented or under-represented in any form [CORRECTION: No songs from the band’s 1990 album “East of The Sun, West Of The Moon” and 2015 album “Cast In Steel” were featured in this setlist.] Other noteworthy guests included Lissie ( featured on “I’ve Been Losing You“), and Ingrid Helene Håvik (featured on “The Sun always shines on TV“).

For any act with ten albums in their back-pocket, putting together a setlist of 21 songs must be a challenge. One of the unfortunate consequences of that challenge is that there are the inevitable noteworthy omissions. For this specific event, “Under the makeup“( from 2015’s “Cast In Steel“), and “Butterfly Butterfly” (from the band’s greatest hits album aptly titled “25” in 2010 marking 25 years as a-ha) were the songs that would have fit very well for the acoustic set that a-ha played. Sadly, these songs were not played.

Bands these days can be immensely successful without an American footprint. Representative examples include Robbie Williams, Jamiroquai, Suede, and Take That. The “90s and beyond” catalogs of bands such as a-ha and George Michael would also fall into this category. For once, it would be nice for the US to allow a platform for these acts to be heard at scale and for a re-evaluation of the music of all these acts to be forced. It just might bring some respectability that is sorely lacking in the American music scene. a-ha’s acoustic concerts are a testimony of superior artistry whose sonic shimmer cannot be eroded by the passage of time. If only the US knew what it was missing out on and could move the past the “pin up” image that they have tied the brilliant a-ha to.

We are an American internet radio station that broadcasts worldwide. The station features an eclectic mix of current pop and rock music from both sides of the Atlantic alongside hits, forgotten gems, and rarities from the last three decades. The music of a-ha (both old and new) is a regular staple on our radio station. The music (both old and new) of a-ha is a regular staple on our station – including songs from the “Cast In Steel” album. We also play plenty of newer music by bands that rose to prominence in the 80s. Noteworthy examples include Tears For Fears, Duran Duran, Camouflage, Spandau Ballet, George Michael, INXS, Depeche Mode, Johnny Hates Jazz, Simple Minds, and Culture Club.