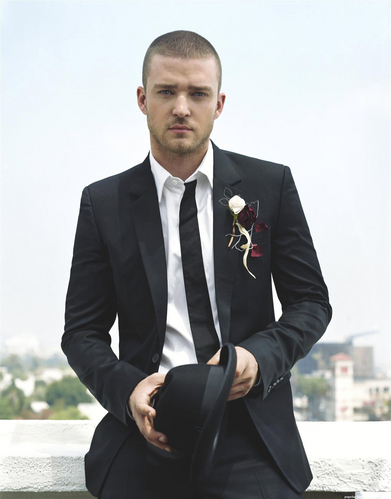 There is something about the first great pop song of a year coming from rather unlikely sources. If 2012’s first great pop song came from a singer that we associated almost exclusively with the early 80s, 2013’s first great pop song comes from an artist that we absolutely dislike. For those of you that listen to our 24/7 global radio broadcast, you would know that we are fairly unapologetic for our disdain of former N Sync member Justin Timberlake. In fact, so far, we have expressed our lack of love for Justin Timberlake by featuring absolutely nothing by him on our daily playlists. It is fair to say that his new single “Suit And Tie” (featuring Jay-Z) will change that.

It has been six and a half years since Justin Timberlake’s last solo album “FutureSex LoveSounds“. The album proved to be a big win for Justin. It also featured his incredibly trashy and musically void hit single “Sexyback” (songs like these make us discount Justin’s artistic merit!). A gap of over six years is enough to make an artist yesterday’s news. George Michael learned this the hard way when he waited six years to release his career masterpiece “Older” in 1996. Fortunately, Justin Timberlake knew exactly how to remain in the public eye. He featured on several singles (e.g. “4 Minutes” by Madonna) by other artists and also featured in prominent roles in movies such as “Social Network”. This makes the fact that his last album was released ages ago quite forgivable in the eyes of the mainstream music consumer. It also acts as a catalyst in generating anticipation for his new album slated for release this year.

As I hit the “play” button on the new Timberlake single, I was already crafting a harsh review in my head. The horrific minute-long down-tempo introduction to the song made me believe that I was justified in my prejudice when all of a sudden the intro ends and breaks into what feels like a delectable leftover from the late 70s – something that could have been featured on a Jackson 5 album. Justin Timberlake kicks his falsetto into high gear and emulates a vocal style that is very reminiscent of Motown-era artists. If a “throwback” style is what he was aspiring for on this song, he most certainly hit the nail on the head. The song sounds almost nothing like his earlier material. This is a good thing for any artist that wants to demonstrate creative progression through his or her material.

The chorus is insanely catchy and features great falsetto-driven harmonies – especially on the repeating refrain “let me show you a few things”. On this song, hit-producer Timbaland manages to layer modern beats over a “live band” feel (captured distinctly by the prominent horn sections) thus creating a winning combination that leaves the listener longing for more.

Featuring prominent rappers on a lead single is the oldest “commercial crutch” trick in the music business. Hence, when we heard that Jay-Z is being featured on the new Justin Timberlake single “Suit And Tie”, I automatically assumed it was a ploy to compensate for a underwhelming track. I was absolutely wrong. While Jay-Z does not necessarily add value to the song, his down-tempo section on the track does not detract from the song either. Would the song work without Jay-Z? Probably.

It is great to see an artist we detest dig deep into his creative well and give us something we are proud to write about and feature on high-rotation on our radio broadcast. Justin Timberlake has more than redeemed himself for inflicting the world with “Sexyback“. If “Suit And Tie” is representative of the overall sound of Justin’s new album, we have a true musical gem to look forward to. Without further ado, here is a full-length clip of “Suit And Tie” below: (We strongly suggest skipping the first minute of the song since it is very likely to put you off!).