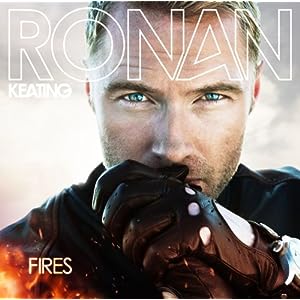 Ronan Keating, Irish pop star and former lead singer of the hit-making boyband Boyzone, has been no stranger to personal loss in the last few years. It is no secret that for artists, tragedy has the potential to act as a catalyst for creativity. Some artists leverage this creativity by exploring the emotions and stories that are intrinsically tied to their personal tragedy. Others pursue an avenue of creativity that purges from them the feelings of negativity surrounding their tragedy. A single listen of the new Ronan Keating album “Fires”

makes it fairly obvious that he has opted for the latter approach -and fortunately for him and his fans, it truly works.

Before diving into the details of the new album “Fires”, it is worth revisiting Ronan’s artistic trajectory from his beginnings as primary vocalist of Boyzone up until now. Boyzone ushered in a second wave of boybands in the mid-90s in Europe. They were rising to prominence just as the world’s biggest boyband Take That was getting ready to wind up with Chapter 1 of their career. The Boyzone catalog was largely “lightweight” boyband fare  and featured a fair share of cover versions. Enjoyable but by no means groundbreaking. That being said, their occasional moments of brilliance radiated through on songs such as “All That I Need” and “Picture Of You” wherein the latter song is the truly noteworthy one. Despite the largely disposable nature of Boyzone’s music, the one aspect that lingered in the heads of musical listeners was the powerful and distinct vocals of Ronan Keating. Whether or not people liked Boyzone or their music, Ronan’s superior vocal ability was an undebatable fact. It was fairly obvious that he was the singer poised for the greatest level of success amongst the five of them.

The predictions for Ronan’s success proved to be true on his eponymous album “Ronan”. Ronan ditched the Boyzone formula and instead hooked up with New Radicals frontman Gregg Alexander to put together an album featuring a fair share of infectious up-tempo radio-ready pop songs such as “Lovin’ Each Day” and “Life is Rollercoaster”. On the down-tempo side of the musical spectrum, Ronan Keating’s cover of “When you say nothing at all” (originally performed by American country artist Keith Whitley) eclipsed older renditions on every dimension and cemented Ronan Keating’s position as a bonafide popstar worldwide (except the US and Canada). Ronan had officially passed the “commercial test” of his ability to shed his musical past with Boyzone and go solo. Instead of riding this wave, Ronan Keating started to steer away from the mainstream pop formula and started to reposition himself as a balladeer – and this led to multiple albums of primarily middle-of-the-road ballads. Rather unsurprisingly, this marked the beginning of his commercial decline. Reviving Boyzone in the midst of the reunion bandwagon of the mid-2000s was a great damage control measure that yielded the beautiful single “Gave it all away”. Sadly, Boyzone band-member Stephen Gately’s untimely demise right before the release of their first new studio album (since their reunion) “Brother” brought this new momentum to a grinding halt. Since then, Ronan has continued with downtempo music projects that were not aimed at commercial success. Hence, Ronan did not leave much in terms of excitement or anticipation for his new album “Fires”.

Fortunately, Ronan has halted the MOR ballad overdose and has re-embraced his “pop” roots on “Fires”. This might not be very obvious with the album’s title track and opening track “Fires”. “Fires” is characterized by a distinctly adult alternative sound and while it marks a welcome departure from the material on Ronan’s previous three albums, it pales in comparison to the brilliance that follows. The album’s first truly brilliant moments are on “Nineteen again” – a song characterized by the New Radicals-esque guitar-driven sound layered with piano (courtesy of songwriter and producer Gregg Alexander) and Ronan’s vocals. If the ideas of “30s being the new 20s” or “30s being the new age of youth”  needed an anthem, “Nineteen Again” fits that need very well.

“So who’s to say that you’re over the hill

At 25, just starting the thrill”

And the gang we’re an all night show,

The fun begins when you just let go”

The bits where Ronan sings “Don’t slow down baby” are bound to be stuck in the heads of music listeners for a while. This song can be best described as the sonic twin of the amazing “Life is a rollercoaster” (a huge hit for Ronan off his debut solo album) despite being more uptempo. It is a shame that Ronan has expressed his reservations about releasing this song as a single  – especially since it has the word “hit” written all over it.

The album’s second set of brilliant moments are on the beautiful ballad “Wasted Light”. On “Wasted Light”, Ronan sings from the perspective of a man reminiscing about a love that took the form of a journey. This man pines with a hint of optimism for the return of that loved one. The track opens with a sparse acoustic guitar arrangement and a light mid-tempo percussion that one can easily snap his or her fingers to. It incorporates more sonic layers as the verses progress  serving as a gradual build-up for the achingly beautiful chorus:

“It’s a long way down

when you’re far from the ground

And I’ve been falling most of my life

And though the sun shines on

Even after you’re gone

I feel sorry for the wasted light….”

The song paints quite a picture and despite its lyrics, has an uplifting feel with a flavor that is reminiscent of Ronan’s debut single “When you say nothing at all”.

The third truly brilliant moment on the album is one of the deluxe edition tracks. The song is called “Will you ever be mine”. The song can best be described as being the musical mid-point between hits like “Lovin’ Each Day” and “Life Is a Rollercoaster” with songwriter/producer Gregg Alexander’s stamp all over it.

Besides, the three highlights, there is much to appreciate on the album – for both die-hard fans and casual listeners. Ronan indulges the uptempo side of himself on “Oxygen” – and that is bound to please die-hard fans. He also includes his fair share of pleasant (thought not particularly memorable) down-tempo tracks such as “Easy now my dear”, “Love You And Leave You” and “The One You Love”.  Ronan might have hit a vocal zenith on “I’ve Got You”. The album’s only misguided attempts at sounding “contemporary” manifest themselves a little on “NYC Girl” and “Lullaby” (which features an out-of-place rap verse by Kizmusic). Given the rest of the material on this album, Ronan deserves to be forgiven for this oversight.

In a nutshell, Ronan has gone full circle back to a formula that made his debut album a global success. “Fires” encompasses the key musical ingredients of a great pop album with at least five radio-worthy tracks. In an age wherein artists do not even aspire to create great albums or albums with immense “singles potential”, Ronan has most definitely accomplished something substantial on “Fires”. He also serves as yet another reminder of what American music listeners are missing out on because of US terrestrial radio programming’s relative insulation from the musically and creatively more exciting side of the Atlantic. With the internet being a more pervasive avenue of music discovery today than it was back in 2001, hopefully “Fires” will not be the relative “secret” that “Ronan” was back in 2001 and gets the states-side recognition that it rightfully deserves. The album is a welcome return to form for Ronan and hopefully this is a sneak preview of greater material to follow.