This concert review is by guest blogger Lax Madapaty 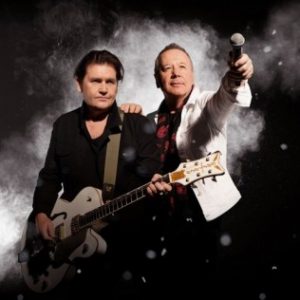 In the US, the Scottish band Simple Minds seems to be inextricably and almost exclusively linked to their signature hit single “Don’t You Forget About Me” (popularized by its inclusion in the motion picture soundtrack of “The Breakfast Club”). This is despite the fact that the band had several other US top 40 singles. Noteworthy examples include “Alive and Kicking”, “All The Things She Said”, and “Sanctify Yourself”. As with most bands that rose to prominence in the 80s, Simple Minds did struggle a bit in the 90s (at least in the context of the US mainstream), as American radio gatekeepers had turned away from New Wave hitmakers and seemed to focus almost exclusively on artists and bands that were byproducts of the burgeoning grunge and alternative rock scene. Simple Minds did not slow down and their continuing tenacity translated to 18 studio albums – the most recent one being “Walk Between Worlds” – their first UK top 5 album in 20 years. Their concerts in Europe have been met with glowing reviews. It was only a matter of time before they graced our side of the Atlantic.

I had the privilege of attending the soundcheck, Q&A and the band “meet and greet”, thus was the beneficiary of a more holistic concert experience. The entire band – Jim (vocals), Charlie (guitars), Cherisse (drums), Sarah (backing vocals), Ged (bass) and Gordie (keyboards) enthusiastically greeted the small group of fans prior to the show. Each fan got the golden opportunity to speak to the band for a few minutes and have their photo taken with them. Lead singer Jim asked fans how long it had been since they last played Austin. It has actually been 32 years and knowing that it has been a while, Jim said that they’d try to make up for it. As it turned out, it was the understatement of the year! Following that, we were treated to a special and exclusive 3-song soundcheck – which included “Glittering Prize”, the relentless “Speed Your Love to Me” and a cover of “The Call Let The Day Begin” (in memory of Michael Been who Jim seems to have some history with). This was followed by a Q&A session in which Jim spoke at length about his favorite bands, his ex-wives and what it means to be still active and on the road. 40 years after starting the band in Scotland. The band’s lead guitarist Charlie talked about his desire to re-record two albums from the 90’s “Neapolis” and “Our Secrets Are The Same”. 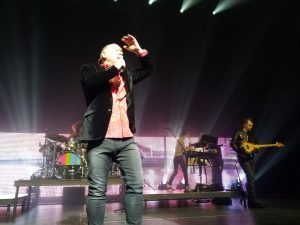 It’s been 5 years since Simple Minds last played on American soil. Having only been acquainted with the band’s back-catalog in 2013 or so, I seized the first available opportunity to see them live and traveled to Europe for three concerts in Antwerp, Berlin and Hamburg on their “Big Music” tour. Hence, the decision to attend this show was a no-brainer for me – especially since it was at Moody Theater at ACL Live, one of the best designed music venues with wonderful acoustics and not one bad seat in the entire hall. In addition to live concerts and events, this venue is host to the longest running music-based public TV program by the same name – Austin City Limits, started in 1976, a year before the genesis of Simple Minds.

Quite predictably, the audience was dominated by fans in their 40s and 50s. That being said, there was a noticeable number of attendees in their 20s that were unaccompanied by parents or older family members. This was undoubtedly encouraging. It did suggest that some bands can work around the seemingly impenetrable ageist bias the gatekeepers of the American mainstream have perpetrated. More importantly, it validated the idea that great music does in fact transcend generational boundaries. 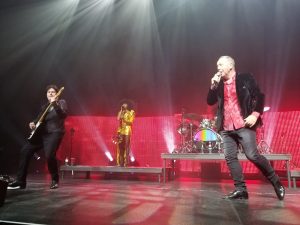 This tour was labeled Walk Between Worlds Tour/Celebrating 40 Years, setting the expectation that this show will feature songs from their latest album “Walk Between Worlds” alongside selections from an illustrious career that has spawned 18 studio albums. No easy task! As the lights went on and the stage was lit with an illustration from the cover of Walk Between Worlds, Jim and team were received with great applause as they emerged on stage. This was the moment fans had waited for for decades for this moment. For others, this experience was a first. The band kicked off the show with the epic and anthemic “Signal And The Noise” (from “Walk Between Worlds”). The song brimmed with searing electronics, hard-hitting drums and epic singing. The crowd was electrified but little did we know this was start of a 3-hour rockathon (with two-breaks in between) showcasing 25 songs.

The first set comprised of 11 songs, with both “Up On The Catwalk” and “Promised You A Miracle” receiving loud applause and cheering. The band ended the set with a surprising choice – a cover of Evan MacColl’s Dirty “Old Town” from 1949. Lead singer Jim Kerr embodies a charisma and magnetism that is relatively unmatched by frontmen of any pop or rock band working today. He is a master at engaging with audience members from every corner of the venue. He looks at specific people in the front rows, he calls out various sections of the audience throughout the show, and he asks everyone to participate in some of the songs, by offering the mic to them. He does all this with astounding energy, even managing to do splits during some of the songs, falling down on the stage during others, and talking about how much he and his band members have been enjoying this long-awaited US tour.

The second set was far superior, with 10 songs and some incredibly passionate engagement with the audience throughout. The band kicked off with an incredibly tight rendition of the instrumental Themes For Great Cities and Jim launched into “She’s A River” to loud screams of joy from many, including me, as it was one of their best songs from the 90s. It was heartbreaking to see him act out the lyrics to the slow and sad song “Dolphins” from their masterpiece “Black And White 050505”. The mood of the audience shifted rather suddenly when the crowd sensed the first few notes of the band’s signature hit in America – the end titles track of the hit cult flick “The Breakfast Club” – “Don’t You (Forget About Me)”. This song was created for a live audience to sing along – especially with the addictive “he he he he” and “la la la la” sections. This set ended with another revered classic in the Simple Minds canon, New Gold Dream. The band departed from the stage right after – but fortunately not for long.

The encore began with a plea from Jim Kerr asking the crowd “can we play some more?”. Yes please! The band then launched into Book of Brilliant things, a song that Jim confessed to having a strong identification with due to his deep love for books. But a surprise twist awaited us. It was backup vocalist Sarah Brown with her incredible vocal range that led the vocals on this song while Jim smiled on in approval. This was followed by a concluding trio of songs. 3 hours and 25 songs later, we still had energy left in us for some more. Such was the impact of the show and the deep connections made with us by Jim and co. 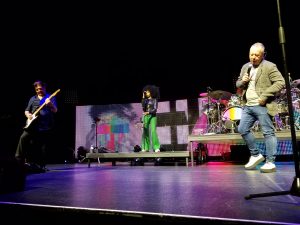 A few notes on the band members. Cherisse Osei the drummer, arguably had the hardest job of the night. It’s no easy task to drum for almost 3 hours – something she did with a smile while singing along for the lyrics and wearing a dress and high heels! She is undoubtedly a worthy replacement for the band’s longtime drummer Mel Gaynor. Ged Grimes, the bass player, was his usual high energy self. His shining moments were on the three songs that were showcased from the band’s “Real Life” album. Gordy Goudie looking like a 70’s rock icon, did duties on both acoustic guitar and keyboards, adding much to the live sound of Simple Minds. Sarah Brown lends her voice as an additional layer to Jim’s amazing singing. Last but not least, guitarist Charlie Burchill (one of rock’s most underrated songwriters and guitarists) played with incredible energy and passion throughout the show.

Given that the band’s US legacy is largely rooted in their 80s back-catalog, it was quite unsurprising that this reality was reflected in the song selection – especially from the revered album classics “New Gold Dream” and “Once Upon A Time”. The live versions of these songs were dramatic improvements over the studio originals. Representing the entire breadth of a back-catalog can be a monumental challenge for a band as prolific as Simple Minds. As a result, 8 out of their 18 studio albums went unrepresented. The most noteworthy exclusion was that of their modern masterpiece “Graffiti Soul”. The album’s opener “Moscow Underground” has been featured just once, earlier on this tour. Fortunately, the latest album “Walk Between Worlds”, undoubtedly one of the best of their illustrious career and easily one of the best albums of 2018 received good representation, with half the songs from the main album featured throughout the show, including Cherisse’s favorite Sense Of Discovery.

Needless to say, the concert was memorable. Jim Kerr more than compensated for the lost years, and the lack of consistent support from the US concert promoters. It’s a miracle that the band is active and going strong 40+ years since their humble beginnings in Scotland. And with Big Music (2014) and this year’s Walk Between Worlds, has made some of the best music of their entire career, while treating fans to some of today’s most amazing live concerts of any musical genre. Longevity is not something the modern crop of artists and bands can hope for. This is probably more a reflection of the environment in which they are seeking to emerge as opposed to their artistry. Hence, one can only feel grateful that acts such as Simple Minds rose to prominence in an era that was far more encouraging of experimentation and far more forgiving of artistic misfires. Musical creativity is a culmination of fearless experimentation unconstrained by boundaries created by music record executives. Simple Minds have indulged in this creativity and continue to be a potent force to be reckoned with 40 years since they came to be. Music aficionados are better off for that!

The concert setlist is below: 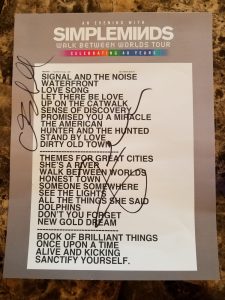 In case you did not pick up on this earlier, the blog you are reading is affiliated with Radio Creme Brulee – an online radio station that features an eclectic mix of current pop and rock music from both sides of the Atlantic alongside hits, forgotten gems, and rarities from the last three decades. The music of Simple Minds (both old and new) is a regular staple on our station. Alongside newer artists, we also play plenty of newer music by bands that rose to prominence in the 80s and 90s. Noteworthy examples include Simply Red, Wet Wet Wet, Tears For Fears, Suede, The Corrs, Dubstar, Duran Duran, Camouflage, Spandau Ballet, INXS, Depeche Mode, Johnny Hates Jazz, George Michael, and Culture Club.