“Sing Street” celebrates escapism in the midst of adversity

“It’s all about the girl right…and you’re going to use somebody else’s art to get her? Are you kidding?” – says the character of Brendan (played by Jack Reynor) to his brother Conor, the movie’s protagonist (played by debutant actor Ferdia Walsh-Peelo). The timing of this line in the movie could not be better. It arrives soon after the finale of “American Idol” – a television show spanning fourteen years devoted to glorified “flavor of the moment” karaoke artists winning over the hearts of legions of fans worldwide with the art of others. This emphasis of originality over blatant borrowing of art is just one of the many themes explored in the multi-layered gem of a movie that “Sing Street” is.

“Sing Street” can be considered the third movie in a trilogy that consists of the movies “Once and “Begin Again” – all of which have been directed by the brilliant Irish writer/director John Carney. The unifying thread that ties the three movies together is the catharsis that music provides to the movie’s key characters from the trials and tribulations that plague their lives. Despite the seemingly hopeless prospects for the movies’ central characters, all three movies brim with a radiant optimism that is bound to bring a smile to every viewer’s face.

Set in the year 1985 in Dublin, the movie successfully captures the mood of dejection and pessimism that enveloped Ireland through the 1980s. It was a time characterized by high unemployment and mass emigration – especially to the UK. The crippling sense of hopelessness is echoed in the lines of many of the characters in “Sing Street” – most notably Eamon (played by Mark McKenna) when he asks Conor to go the UK and “get us a record deal so that I can get out of this shit hole”.

The movie begins with Conor playing the guitar while listening to a conversation between his parents. The acrimonious conversation is a painful glimpse into a downward spiraling marriage. His coping mechanism in that situation is to sing some of the insults that his parents are hurling at each in musical note. Conor gets an even ruder jolt of the Irish reality when his parents tell him that their finances are dwindling (as a result of tough economic times for the country and for his father) and that he is being “transferred” from a fee-paying school to an authoritarian all-male free state-school called “Synge Street CBS”. He is an obvious misfit in a school dominated by boys that apparently lack even the slightest iota of breeding, ambition, and discipline. This rough new environment is run by the unreasonably strict and sadistic principal Brother Baxter (played by Don Wycherley). After an unfortunate incident in which Conor is the victim of an act of violence from the cruel school bully, he meets the stunning Raphina (played by Lucy Boynton). He musters the courage to speak to her. On learning that she is a model, he plants in her head the idea of her appearing in a music video for his non-existent band. Her tentative agreement to star in his music video drives Conor to put together a band called “Sing Street” ( a play on the name of the members’ school) and it triggers a journey and burgeoning ambition that is both inspiring and incredibly escapist.

After being chided by his brother Brendan for attempting to be part of a covers band, Conor nurtures a beautiful songwriting partnership with band-mate Eamon. Drawing inspiration from the foundational sonic elements of the music Brendan introduces him to, the bleakness of his life, and his blossoming romance with the rather complicated Raphina, Conor ‘s attempts at musical originality come to fruition through songs such as “Riddle of the model“, and the super-addictive “Drive it like you stole it” (a fantastic modern-day tribute to “Man Eater” – the hit single by pop duo Hall & Oates). One of our favorite song-synthesis attempts by Conor is the one he does to capture the contradictory “happy-sad” factor of love that Raphina articulates to him. His inspiration for this endeavor is the song “In Between Days” by The Cure. The music videos for his songs mimic (on a a smaller scale) the glam-factor, goofiness, androgyny, and hedonism of New Wave acts such as Duran Duran and Spandau Ballet. Another aspect of the glorious New Wave era that they borrow is the homegrown sense of fashion by the sonic architects of that period’s music. Raphina is a willing star in their music videos and also serves as their makeup artist that generously uses “guy-liner” on the band-members. As the movie progresses, the various facets of Raphina start to present themselves and Conor’s drive to realize his dream crystallizes with the help of sincere encouragement from his brother – thus leading to a happy ending that also leaves the viewer thinking “I wonder what happens next”.

Music from the 80s is a core theme of this movie. In many ways, “Sing Street” celebrates the tradition of authenticity and the organic synthesis of songs that became the soundtrack to what many believe was the last truly creative period in pop music. The story’s plot mirrors the reality of some of the faces and voices of the New Romantics movement. Music as an escapism from a grim family life is something musical maestros Tears For Fears actively explored as they rose to global fame in the 80s. The “Sing street” band manager Darren (played by Ben Carolan) exudes an entrepreneurial spirit that is reminiscent of that of Steve Dagger – the manager of Spandau Ballet. In the beginning of the movie, Brendan makes a compelling argument to his father for the significance of the music video as an emerging art form while watching the video for Duran Duran’s hit single “Rio“. Brendan also makes a subtle call to the timelessness of Duran Duran by saying “the jury’s still out on which way these guys will go but they’re a lot of fun”. In light of the fact that Duran Duran is in the middle of a North American tour to promote their US Top 10 album “Paper Gods” speaks volumes in response to Brendan’s open-ended comment on the future of Duran Duran and bands from that glorious era. Last, but not least, the movie is a celebration of the “larger than life” dreams that many of the bands from the 80s had – many of whom were from working class families. 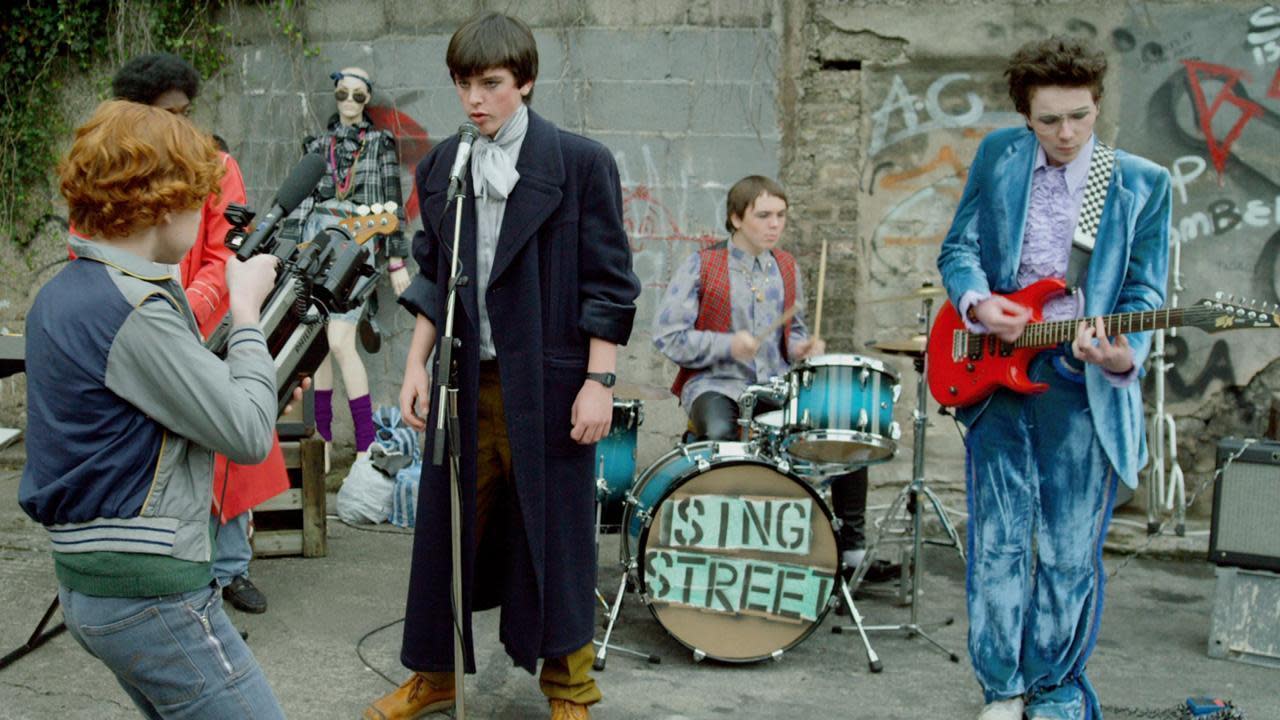 Music as an avenue of escapism is also emphasized on more than one occasion in this movie. Two of the movie’s most heartwarming scenes touch on this idea. The first is the one in which Conor dances with his brother and sister in their bedroom to Hall & Oates‘ “Maneater” while the collapse of their parents’ marriage is becoming increasingly imminent downstairs. The second scene is the one in which Conor visualizes his picture-perfect reality while performing “Drive it like you stole it” along with his band to an audience. Bollywood movies have married dreams with musical sequences for years but director John Carney’s vision of an idealization carved from Conor’s child-like innocence is achingly beautiful.

This review would not be complete without at least mentioning the movie’s stellar soundtrack. The compilation is a mix of old hits such as “Rio” by Duran Duran and “Gold” by Spandau Ballet – as well as new songs that are created from the perspective of a musician trying to imitate sonic elements of music of the time while putting his own personal stamp on it. To this end, John Carney enlisted the help of Scottish songwriter Gary Clark to pen these fantastic songs. Not only are these songs fantastic but they are a great tribute to an era of music that critics are often dismissive of.

Comparisons to movies like “Once” and “Begin Again” by John Carney are inevitable. John Carney has definitely set the benchmark pretty high with “Begin Again”. Fortunately, “Sing Street” comes pretty close to the heights scaled by that gem of a movie. “Sing Street” is an absolute “must watch” and warrants a larger scale release than the one it is getting today. It just might be the “feel good” movie of the year. We can barely wait for John Carney to lay the groundwork for another angle around music as a a therapeutic and liberating force.