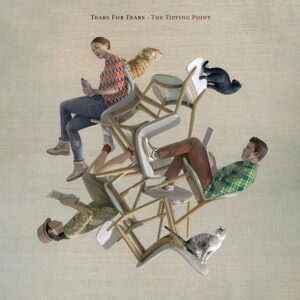 In a 2010 interview with The Guardian, Curt Smith of groundbreaking New Wave duo Tears For Fears said the following about record companies – “They want cookie-cutter acts. For us, making a record would be a money-losing proposition”. This seems to be the unfortunate reality for most music acts that rose to prominence in yesteryear. The narrative about these acts in the music press seems to be inextricably linked to their past – leading them to also have the label “legacy acts” attached to them. This renders them relatively unmarketable to a younger audience despite a stellar back-catalog heavy on anthems that have transcended generations and that have stood the test of time. This is despite the fact that many of these artists are recording and releasing music that retains the elements of what made them great while also having a stamp of modernity. Based on Curt Smith’s remarks to The Guardian, not many would have held their breath for a new album from the duo. Most would have resigned to the idea that the band’s 2004 album “Everybody loves a happy ending” (their first as a duo in over a decade) was their final album. Hence, at the end of 2014, when Tears for Fears teased a new album, fans were beyond elated. “Everybody loves a happy ending” had a rather polarizing effect on the band’s fanbase owing to a sound that in ways felt like a departure from their trademark sound and veered closer to something Beatles-esque. Hence, the question of consequence this time around is whether or not Tears for Fears has undone that polarization and made the wait worthwhile for their new album “The Tipping Point”. Fortunately, the band has reinvigorated their sonic mojo and have more than delivered the goods on this album.

It is impossible to dive into the specifics with regards to the album without devoting at least some word real estate to its genesis. It appeared that that the dynamics that Curt Smith pointed out in his 2010 interview with The Guardian were still very much in play. The duo (Roland Orzabal and Curt Smith) were encouraged to work with current hitmakers (one of them being two-time Ivor Novello award winner Sacha Skarbek) on a quest to manufacture “hit singles”. The duo embraced this approach despite it being at odds with their longstanding ethic of creating a cohesive album from which hit singles emerged organically. The pairing of a veteran act with current songwriters/producers is not a particularly novel idea and almost never has it been a catalyst for a veteran act’s return to the forefront of contemporary culture. New Wave hitmakers Duran Duran learned this the hard way with their 2007 album “Red Carpet Massacre” for which they teamed up with “producer of the moment” Timbaland and hitmaker Justin Timberlake. Despite the album’s potent lead single “Falling Down” (a song that belongs in the same league as hits such as “Ordinary World” and “Come Undone”), the “modernity” of the record did nothing to break the band to a new generation and the album sounded like something that could have been great but wasn’t. Hence, it is unclear as to why anyone would suggest Tears For Fears going down a similar route.

After listening to what they had recorded, both Roland Orzabal and Curt Smith acknowledged that the musical output of those writing/recording sessions sounded nothing like them. They retreated from this misguided approach, and went back to the drawing board to start working on a new set of songs. They reconvened in early 2020 and went back to the basics with acoustic guitars in a room together and from this sonic interplay between the two emerged the Americana-tinged “No Small Thing” – the first song on ‘The Tipping Point” album. The band embarked on creating the seminal album experience (a bold move in an era in which the relevance of the album format is being questioned given the consumption of unbundled tracks being the new norm). In a TedX talk that Curt Smith gave in San Francisco in 2010, he mentioned that “I use music to talk about things that I find confusing, things that I find hurtful. If I am happy, I don’t write songs since I am too busy actually being happy”. The band seems to have channeled this spirit and made an album that projects their emotional response to the events shaping their lives in the last few years. Noteworthy examples include the tragic downward spiral (which led to demise) of Roland Orzabal’s former wife Caroline, the BLM protests, political upheaval, the #MeToo movement, and the harsh and devastating manifestations of climate change. This makes their album name and title track “The Tipping Point” an apt one – since for each of these phenomena, there is a point of no return – the tipping point! In a sense, the choice of the title track as the lead single was wise in that it offers listeners a glimpse into the themes being explored on the album.

Since our blog is attached to a 24/7 global online radio broadcast, we feel compelled to start off by commenting on the radio fodder that this album offers before we comment on the album as a cohesive unit. To this end, the highlights are as follows:

Nothing screams “comeback” the way this song does – which makes us wonder why this up-tempo jam (featuring Curt Smith as the primary vocalist and songwriter) was relegated to “third single” status on the album when it would have made a fantastic lead single. This song also has the highest likelihood of being a bridge to a generation that is unfamiliar with the history of Tears For Fears. “Break the man” opens with delicate piano embellishments (reminiscent of the band’s 1989 single “Advice for the young at heart” from their “Seeds of Love” album) floating gently over a soundscape of mid-tempo electronic beats. The verses are ushered in with the eruption of guitars shattering the soundscape and changing the tempo of the song. Sweeping harmonies and a sing-out-loud chorus give sonic form to an appeal for putting women in positions of power while shattering the proverbial patriarchy. The chorus is as follows:

Thematically, it feels like a sequel to their 1989 hit single “Woman in chains” – a song about domestic abuse of women. The fact that over three decades have elapsed since the cry for help for women and an appeal for more women to be in positions of power suggests that strides in female empowerment have not been significant enough. The song’s dreamy outro mirrors the intro leaving the listener wanting more. Nothing on the duo’s “Everybody loves a happy ending” album was this instant.

The album’s lead single is a window into the head space of singer and Tears For Fears co-founder Roland Orzabal as he sat in a hospital in 2017 wondering at what point his wife Caroline would make the crossover from life to death and about when the mourning would begin. While the song is intensely personal, the bleakness of it all is applicable to the collectively reality of the world over the last two years. The song’s larger than life production bells and whistles compensate both for the darkness of its thematic core as well as the song’s rather pedestrian melody. In an interview with The Current, Roland Orzabal offers the best description of this song and how their longtime collaborator Charlton Pettus laid its sonic foundation – “Now I think Charlton [Pettus] was getting a bit miffed that we were working with other guys when he knew exactly, having been touring with us for years, he knew exactly how to write a Tears For Fears song. He thought, let me get some kind of moody synthesizer. Use the beat from “Everybody Wants to Rule the World“, a little of a “Head over heels” piano motif, and it sounds horrendous. It sounds like Frankenstein’s monster. But in fact, what he created was the germ of the most beautiful, beautiful yearning song.”

I am on the fence as to whether “My Demons” and “End Of Night” qualify as potent radio fodder. The up-tempo “My Demons” brims with the lyrical and sonic swagger of material that dominated Roland Orzabal’s solo album “Tomcats Screaming Outside” but like the album’s title track, the melody feels rather simplistic. The mid-tempo “End of night” fares far better on the melodic front and offers a hope and positivity that one experiences when on the verge of a turnaround or a life narrative that dramatically shifts towards something better. It could make a worthy follow-up to “Break the man” as a single.

With the rest of the album, the listener is bound to get a sense of a band that has stayed true to their approach to creating music by mainly drawing heavily from their life experiences. “Please be happy” feels like a thematic sequel to “The Tipping Point” and is an appeal to Roland Orzabal to move on from the loss of his former wife Caroline as he deals with the aftermath of this tragedy. “Rivers Of Mercy” opens with police sirens and a gunshot (an explicit reference to the BLM protests that took center stage a few months into the Covid19 pandemic across the US). It quickly drifts into something quite the opposite as it appeals for a catharsis from chaos and pain through mercy, and understanding as highlighted by the following lyric:

Sonically, it paints a picture of someone drifting right under the surface of the gentle waves of the sun-kissed Mediterranean. This just might be one of the most beautiful moments on the album. It also highlights Roland Orzabal’s competency as a vocalist.

Stylistically, “The Tipping Point” feels like a far better sequel to their 1989 album “Seeds of Love” than its predecessor “Everybody loves a happy ending” does. It is exhilarating, thought-provoking, and most importantly honest. It speaks to the confusing moment many of us find ourselves in right now. It is unclear as to whether this album will be the swan song of Tears For Fears (in interviews, they come across as being incredibly non-committal as it applies to more new music). In case it is, it makes a “happier ending” than their last album did and is likely to undo the polarization of their fanbase that their last album might have been a catalyst for. It is great to have Tears For Fears back in the limelight. Both Roland Orzabal and Curt Smith have retained the spunk that made them global superstars and have created a body of material that holds up well alongside the rest of their back-catalog. Now we just hope we don’t have wait another two decades for the follow-up to “The Tipping Point”.

In case you did not pick up on this earlier, the blog you are reading is affiliated with Radio Creme Brulee – an online radio station that features an eclectic mix of current pop and rock music from both sides of the Atlantic alongside hits, forgotten gems, and rarities from the last three decades. Alongside newer artists, we also play plenty of newer music by bands that rose to prominence in the 80s,90s, and the 00s. Noteworthy examples include Simply Red, Wet Wet Wet, Coldplay, Kylie Minogue, Dubstar, Tears For Fears, Duran Duran, Camouflage, Spandau Ballet, INXS, Depeche Mode, Suede, The Corrs, Jamiroquai, Johnny Hates Jazz, Simple Minds, and Culture Club.