This review is by our highly talented affiliate blogger Sarah Hamilton from Popledge UK.  The new album Robbie Williams album “Take The Crown” has been a highly anticipated piece of work.  Here is Sarah’s take on it! 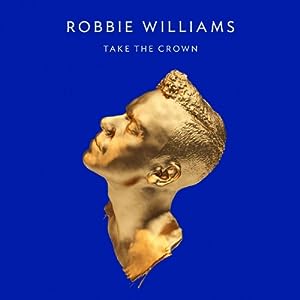 Be a Boy – ‘they said it was leaving me, the magic was leaving me’ sings Robbie Williams throughout the opening track on ‘Take the Crown.’  Essentially this is a retort to all the nay-sayers that gleefully put him down over the years, Robbie responds by singing ‘I don’t think so’ over the electronic inspired track.  After his ambivalence over this last album this is Robbie saying I can do this forever and ‘be a boy.’  He certainly seems to have his fire and motivation back for being a pop star and this is the perfect track to convey this message to fans.

Gospel – musically Gospel follows the trend of ‘Be a Boy’ – it’s a big pop/rock anthem with Coldplay influenced instruments throughout the track along with some pop ‘hand clapping’ moments.  Lyrically I would say it was about a previous relationship of Robbie’s as he sings ‘baby we’ve got history, maybe this is the end?’.  It also features a guest vocalist from the US called Lissie, she adds an extra depth to the song and it really soars into a cinematic climax at the end.

Candy – all together now ‘hey ho here she goes’!  This is the first of two songs on the album co-written by his Take That band-mate Gary Barlow.  It is also now Robbie’s first UK number one in eight years – job done.  In some respect I have always felt this song was a little ‘throw away’ and would actually sit better with a new boy-band such as the Wanted.  However after seeing Robbie performing it live on TV over the past week I have changed my mind, it’s a fun song and great to perform, Robbie can strut his stuff and not worry about the meaning of the song too much (have you listened to the lyrics?)

Different – this is one of the songs where Jacknife Lee’s influence is really apparently, the producer of the album has worked with U2 and Snow Patrol previously and he has channelled that into Robbie’s songs, you got some nice lyric patterns in this ballad but crucially they are paired with some melodic and radio friendly beats.  Robbie is going for mainstream hits with this album, not left-field experiments.  Lyrically it’s a song about begging for a second chance in a relationship, ‘this time I’ll be different, this time I’ll be special, please God let it be so’ croons Williams, this one was also co-written by Barlow.

Shit on the Radio – an expression of how Robbie feels about the songs played on the radio.  To be fair he is right, especially now Radio 1 have ‘banned’ William’s songs due to his age (boo hiss).  The weakest song so far and also the shortest at only 2.50.

All That I Want – we are going back to the electronic synths again with this track.  There’s a few cheesy moments in this track but he just gets away with it..think Take That’s last album ‘Progress’ with an extra layer of Pet Shop Boys and U2 for good measure.  Some of the vocal tricks are straight out of Bono’s ‘how to sing’ manual.  Lyrically it’s a cheeky affair with Robbie singing ‘and I wanna tear your clothes off baby’ before he goes on to describe taking the woman to his bedroom and feeling her breasts.  It could comes across as sexist but it doesn’t, the song is basically about a women wearing an amazing dress and Robbie confessing too her what he’d like to do with her, he sings ‘if I confess will you think less’ (of him) and somehow it comes across in quite a sweet way!

Hunting For You – this song has some insanely catchy moments in it’s backing vocals, if you like a ‘woooo oooooh’ sing-along then this track is for you.  This song on paper could be seen as quite bland or ‘pop by numbers’ again it heavily leans on U2′s style but Robbie’s vocals add an extra quality to it and by the end of the review it was definitely one that stuck in my head straight away – simple yet highly effective pop music.

Into the Silence – wow this really does ‘steal’ from U2′s song-book, I was reminded of ‘All I Want is You’ as soon as the guitar section started.  This song didn’t really click with me, the subject matter and Robbie’s vocals are very serious throughout, the subject matter is quite dark around a past relationship and there is a seriously duff note at 3.00 minutes into the song which I would have edited or left off totally.  Go and buy the Joshua Tree instead of listening to this song.

Hey Wow Yeah Yeah – nope it’s not a Jedward song promise!  Instead it’s a total change of pace with distorted vocal effects, screaming guitars and really punk feel to the track.  Did I enjoy it?  I’m not sure but the pace of the track made it seem like it lasted 30 seconds rather than the 2.52 minutes afforded to the track.  It would make a good interlude during a tour.

Not Like the Others – another fast paced track with Robbie’s vocals on top form, he sings ‘you and me are not like the others’ over a stomping and relentless drum beat.  Again very cheeky suggestive lyrics but again he gets away with it by adding ‘lets do what we’re supposed to do and fall in love.’  One of my favourites, great energy.  Imagine it in a stadium and you’ll be in heaven.

Losers – for the last track on the standard album US female singer Lissie returns.  Lyrically it’s a confessional track with Robbie singing that he now realizes that as hard as he tries there will always be someone better at what he does than him.  He concedes that growing up has made him realize that there are more important things in life than going to parties and ‘being a winner’ and it’s the one track on the album that reminds you that Robbie is now settled, married and a father of one.  Lissie’s voice compliments Robbie but does not dominate the track.  Musically when it starts it’s very folky sounding but it builds into more of a semi-plugged duet towards the end.

The Deluxe version contains two extra songs – Reverse and also the demo version of ‘Eight Letters’ from Take That’s ‘Progress album.’  The DVD version also includes a ‘Making of’ the album alongside ‘Behind the Scenes’ at the Candy video shoot.

Conclusion – Robbie’s most commercially viable album in years, whether he is being ‘over confident bull-ish’ Robbie or the’ over-grown child with some naughty bedroom habits’ he gets away with it.  His producer has kept him to a successful pop/rock sound, with only a couple of stumbles out of the 11 tracks he has produced a fun, inspirational and almost truce-like record with Robbie conceding that he might not yet be the best but he’s going to try damn hard to ‘take that crown.’