Take That’s “III” is far from a “retirement record”

“We’re not writing a retirement record” – said Gary Barlow, the undisputed frontman of Take That – one of UK’s hottest exports and the greatest comeback act in pop music history. Hot on the heels of the exit of band-member Jason Orange from the band, the trio (formerly a quartet with Jason Orange and a quintet with Robbie Williams) announced the release of “III” – their first album as a trio. When Take That returned to the recording studio earlier this year, there was a lot of speculation as to the future direction of the band musically speaking – especially since they had pulled off two stylistic reinventions successfully. The first being an Adult Alternative dominated sound on albums such as “Beautiful World” and “The Circus“. The second being a dark, dramatic and electronic sound on the “Progress” album with hit producer Stuart Price as the sonic architect. Was Take That going to return to the sound of TT4 (i.e. Take That the quartet) or build on the sound that they honed on the “Progress” album (which marked their reunion with Robbie Williams)? The band was going for a sound that is indisputably 2014 – definitely not the sound of a band singing their “swan song” while reflecting back on their legacy for inspiration. More importantly, no one that listens to that album would ever guess that the men singing on this are in their 40s.

One of the noteworthy aspects of this album is its mix of producers that includes Greg Kurstin (has held the production reins for high profile releases by Katy Perry, Kylie Minogue, and Lily Allen), John Shanks, Stuart Price, and Mattman & Robin. The use of multiple producers is a departure from the approach that the band has taken on previous albums in which most of the album was dominated by a single producer. One can only guess that this was done to force an element of stylistic variation within the largely uptempo soundscape. While the production is glossy, modern, and richly layered, certain consecutive tracks on the album tend to blend in to each other. But that does not mean the album suffers from homogeneity. There is enough variation to keep the listener interested throughout the album.

The second noteworthy element of this album is that Gary Barlow sings lead vocals on the most of the tracks. This is in contrast to the “Progress” album on which it almost looked like he took a conscious decision to step back and let Robbie Williams and Mark Owen take control of the vocals.

The album’s opener and lead single “These Days” is without a doubt the year’s most infectious, “guilty pleasure” worthy, poptastic, and uplifting track. More importantly, it is a milestone for a band looking into their future as opposed to resting on their laurels (of which they have too many to count). On “These Days“, the band sings about living in the moment and making memories now as opposed to in the future. There is a sense that the song is sung from the perspective of someone whose love saga has been derailed by circumstance and he wants to go back to where things began and lay the foundation for new memories before it is too late. The lyric is not wistful though. Instead, it radiates a sense of optimism and urgency. One of the striking observations that emerges fairly quickly after one listen to this song is that while it is a great track, no one would ever guess it is by Take That. That being said, “These Days“ does set the tone for this expectation (i.e. not sounding like Take That) for the rest of the album. This does not mean Take That has drowned themselves in the midst of the high-quality production. It just indicates that they have tried hard to stretch the realms of their sonic template. 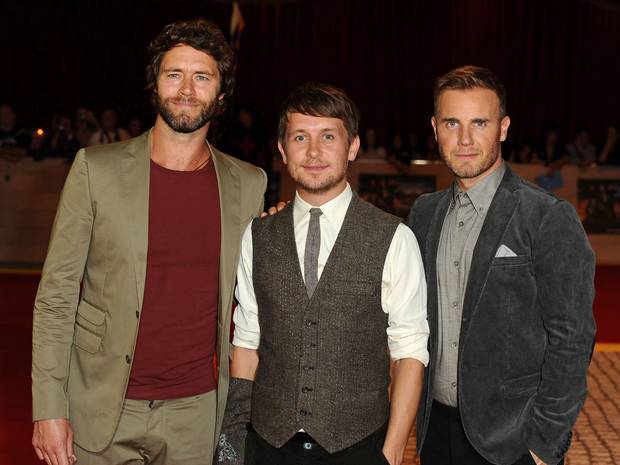 The album has its share of other highlights. “Give You My love” showcases Take That sounding more like a boyband than they ever did. It is a sparsely produced down-tempo electronic track with pretty strokes of guitar harmonies neatly deployed across the song to good effect. Howard Donald sings lead vocals on this. On the chorus, they sound almost identical to New Kids On The Block. No one would guess that this is a Take That track. “Amazing” (available only on the deluxe edition of the album) has a mildly Beatles-esque vibe and showcases Gary Barlow singing from the perspective of a hopeless romantic with an element of measured euphoria about his lady-love. This song is bound to grow on listeners very quickly. It is the closest thing to a modern classic on “III“. “If You Want It” is everything fans have come to expect from the post reunion Take That – a soaring and uplifting chorus with a beautiful harmony.

With all its merits, “III” does suffer from two shortcomings. First, on a few of the tracks, the verses are far superior to the song’s choruses. Hence, what feels like a build-up to something amazing ends up being a preamble to an underwhelming letdown. The two tracks on which this aspect is most prominent are “Let In The Sun” and “Freeze“. On the latter, the sound on the track is very reminiscent of that of the “No Sense Of Sin” album by The Lotus Eaters – a forgotten gem from the 80s. The second dimension on which the album falls a little short is in its absence of an obvious second single. The closest candidate is probably “If You Want it“. In reality, it is rumored that “Get Ready for It” (featured on the soundtrack of the movie “Kingsman: The Secret Service“) is the likely second single.

Despite its two shortcomings, “III” holds up as an ambitious, modern, and commercially viable effort of a band that is looking towards the future and has not become a victim of laziness. The departure of a band-member can be demoralizing to a band – especially since there was a lingering uncertainty about Jason Orange being in the band throughout the entire period during which the album was written and recorded. The “lads” have not let adversity derail their resolve to prove themselves yet again as a potent force in the landscape of modern pop music – and they do so very well with “III“. “III” represents another stylistic reinvention for Take That. After one listen of the album, Gary Barlow‘s statement about “III” not being a “retirement record” at the beginning of this review could not ring any truer.

We are an American internet radio station that broadcasts worldwide. The station features an eclectic mix of current pop and rock music from both sides of the Atlantic alongside hits, forgotten gems, and rarities from the last three decades. The music of Take That is a regular staple on our radio station – even though we are an American radio station. We were the first US-based station to feature “The Flood” when it released in 2010. In addition to Take That singles and singles by members such as Gary Barlow, Mark Owen, and Robbie Williams, we also feature album tracks and b-sides by these artists fairly regularly on our 24/7 global broadcast. Right now, “These Days” by Take That is getting 5 plays a day on our station.