Take That unveils “The Flood”

In late summer of 1996, Take That released their hit single “Never Forget”. Interestingly enough, the single was released right after the high-profile departure of Robbie Williams from the Manchester boyband. I remember being in love with the song but in the midst of all that appreciation was a tinge of sadness. In fact, it was more than just a tinge. It was a realization that the band that I had grown to admire had ceased to exist in the way that I wanted them to. The music video for “Never Forget” was a series of video clips showcasing the glory years of the Manchester quintet. The imagery created by the music video seemed to have an inherent finality to it. The finality of Robbie William’s departure and the end of a glorious musical chapter.

The fast-forward button of life brings me from the day I first heard “Never Forget” to this morning. It has been fifteen years and the tide of sadness has turned into
“The Flood” of joy. Robbie Williams is back with Take That and their new single “The Flood” surfaced on radio stations across the globe this morning. High expectations are a necessarily evil in the context of a band with a stellar legacy. I too am guilty of having those expectations which culminated in a wave of skepticism as I was about to hit the “play” button for the new Take That single to begin playing. Fortunately, that skepticism dissipated very quickly.

“The Flood” begins with lead vocals from Robbie Williams and then breaks into an up-tempo beat that props up Gary Barlow’s preamble to the soaring chorus. Musically, it is quite a deviation from what many considered a rather MOR sound on albums such as “Beautiful World” and “Circus”. Stuart Price’s production adds a mild electronic flavor and a beat that has been conspicous by its absence from a Take That single for a rather long time. After hearing this song, the following questions are bound to emerge:

How does “The Flood” compare to music from the 90s Take That?

There is a reason that songs such as “Pray”, “Relight my fire”, and “Back for good” together form the backbone of Take That’s musical legacy. That automatically means they will never be eclipsed by future offerings. “The Flood” stays within the realms of that universal truth.

How does “The Flood” compare to material on “Beautiful World” and “Circus”? 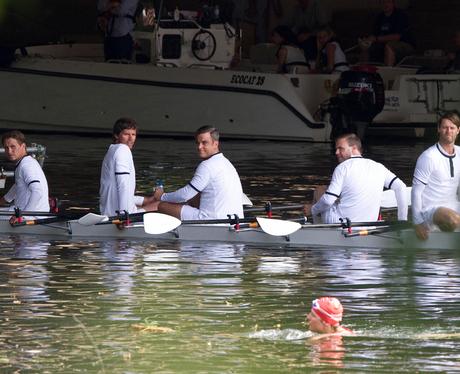 It is, without a doubt, far superior to anything on either “Beautiful World” and “Circus”.

It really ought to but the rather late release (November 14) of the track could be very detrimental to its prospects of topping the UK singles charts. A five-week delay is significant in the context of a music market that is impatient and thrives on instant gratification. Will the excitement of this morning extend all the way to November 14? This is a question Take That’s management and Polydor records ought to ponder over.

Will the media turn this into a “Robbie Vs Take That” rant?

Hopefully the mainstream media has grown up over the last decade – and doesn’t dwell on which of the two entities (Take That or Robbie Williams) is reaping benefits from the other. Artists using each other and producers as commercial crutches is a trend that has been going on for a while. There is nothing new or surprising about it. Noteworthy examples include “Taio Cruz featuring Ludacris”, and “Jay Sean featuring Lil Wayne”. The sad thing is that neither Taio nor Jay needed these crutches. Unfortunately, those were their tickets to stateside stardom. Keep in mind that both Take That and Robbie Williams have had #1 hit albums within the last three years. Hence, neither is using the other as an artistic or commercial crutch. Hopefully, fans will not dwell on that pointless debate. More importantly, I hope that debate does not overshadow the merit of “The Flood” – an amazing first impression of the new Take That album titled “Progress”.

Will “The Flood” mark Take That’s conquest of America?

That is a difficult question to answer. Unlike trying to launch a new artist, launching Take That in America is like battling against a longstanding syndrome of intentional ignorance. Take That has a global following that is bigger than that of any artist with a presence on the US Billboard charts. Conventional wisdom would dictate that they should have been promoted ages ago. Unfortunately, “conventional wisdom” is a trait that is missing from radio programmers of AM/FM radio stations. That being said, a clever marketing campaign could lead to Take That being the center of the American limelight.